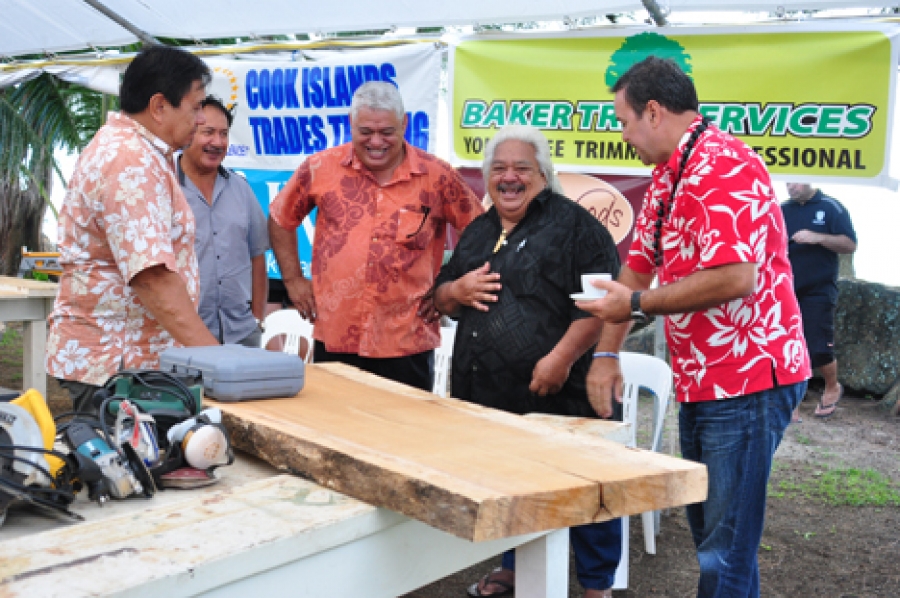 Politicians and carvers catch up over their mutual love for woodwork at the opening of the Taurua Matariki carving and weaving exhibition in Avarua. Pictured are Ngatangiia MP Tama Tuavera, Democratic Party leader William 'Smiley' Heather, master carver Mike Tavioni and Nick Henry.

The special relationship between Aotearoa and the Cook Islands is the focus of this week’s live weaving and carving exhibition in the heart of Avarua.

Cook Islands and New Zealand carvers and weavers have come together this week for ‘Taurua – A Matariki Maori Art Exhibition’ for a programme of creative artistic display.

This will include workshops for the public in the township of Avarua.

The artwork produced will form a commemorative set of works to represent the cultural links between the two nations.

The weeklong exhibition was officially opened yesterday morning with warm greetings for all gathered for the special occasion.

The event is an initiative by the New Zealand High Commission to celebrate the special relationship of ‘free association’ between New Zealand and the Cook Islands with the mornings’ official opening running smoothly and relaxed – a testament of the relationship between the two countries.

This new celebration of the two nations’ partnership is also part of the programme for the celebrations of the Cook Islands 50th anniversary of self-governance.

Carvers from the New Zealand Maori Arts and Crafts Institute (NZMACI) based in Rotorua are on the island finishing off carvings they started back home in Aotearoa.

The institute is a recipient and guardian of a strong nationally-focused cultural legacy.

This legacy positions the organisation at the forefront of Maori cultural representation, locally, nationally and internationally.

Local carvers are in the mix working alongside their New Zealand counterparts showcasing traditional and contemporary carving.

Weavers from the Rarotonga community have been asked to engage in weaving circles at the event, with two New Zealand Maori weavers touring to Rarotonga to partake.

Air New Zealand’s involvement in this week’s event has been crucial and local companies have also come on board to support the unique event, produced by Motone Productions.

The artists will create a set of works that symbolise the partnership reinforcing both countries’ Maori links and our ongoing relationship.

The combined work will be exhibited in Rarotonga until August.

Schools from around Rarotonga have been invited to visit the site and learn and experience carving and weaving art being made.

The public is also encouraged to get along to the site and be part of the live art exhibition.

During lunch there will be live entertainment from noon to 1pm featuring local and international musicians. This has been made possible by the support of the Cook Islands 50th Anniversary celebrations.