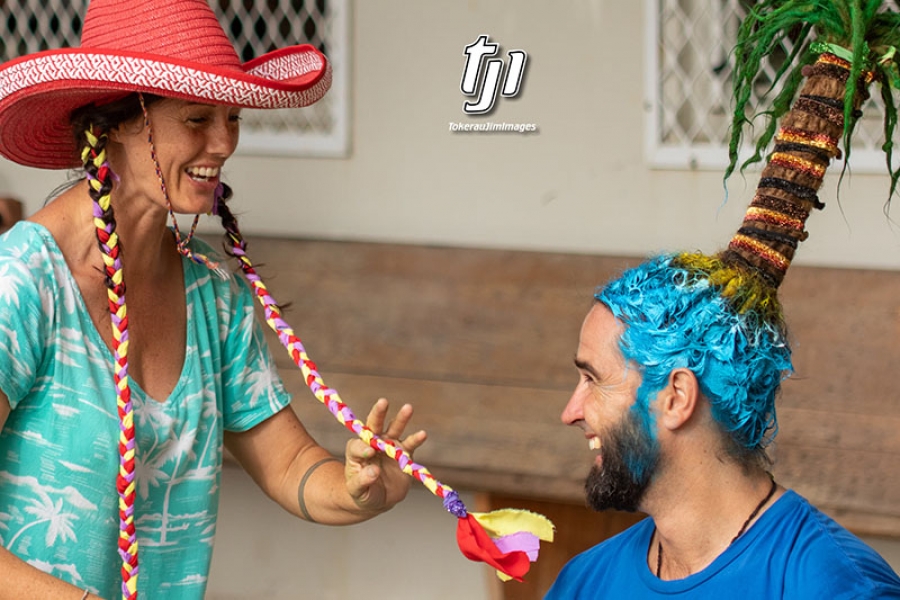 The school celebrated Wacky Hair and Wheels Day, with some ornate hairdos – but the principal’s do was something else entirely.

Harris’ long dreadlocks are a familiar sight around Rarotonga, at the school, in town, on the football field and more … but for the special occasion, he bound them up into an ornate coconut palm atop his head.

His wife Shannon, an art teacher, described the hair art as “a last minute throw together”

“It was just a simple 15 minute job in the staffroom before school,” she said. “It was some non-toxic, water-basedr poster paint and a cardboard tube.”

Cook Islands News asked Divine hair stylist Poloa Rowe to critique Harris’ hairdo – and give him a prognosis on how hard the colours and product will be to get out.

Rowe knows about getting rid of dreadlocks – she wore dreadlocks herself when she was younger!

“Personally if it was me and he wanted to get rid of the whole thing, I would give him a Mohican haircut with a fade on the side, to make him look like a presentable principal again,” she laughed.

The school ambassadors in the senior classes organised the event, and children also brought their bikes, scooters and skateboards to school for races and relacation.

It was the culmination of a big week for students, after the winners were announced in the school science fair.

Photographer Tokerau Jim, whose children attend Te Uki Ou, said he didn’t envy Harris the task of cleaning all the gunk out of his hair, but it was very impressive. “I love all the work gone into each hair artwork!”