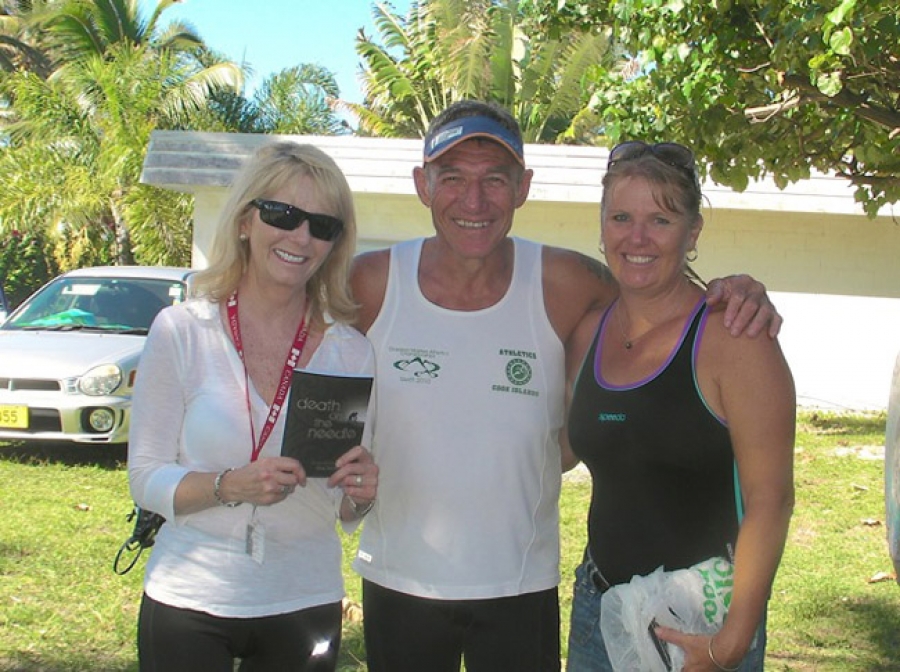 Jackson Phelps is a young man whose name may become synonymous with Rarotonga – but he is a figment of someone’s imagination.

The fictional triathlete is the hero in a new book called “Death on the Needle” written by Canadian Chris Kersey.

Her first work of fiction, “Death on the Needle” came about after she visited the country for three weeks in 1997, experiencing its highs and lows, including Cyclone Pam. She said she fell in love with Rarotonga on that visit and felt it made a perfect location for her book.

She will be here until May 3 when she will be presenting copies of her book as prizes in the 20 and under category of the 20th Air New Zealand International Triathlon.

Earning a Masters Degree in curriculum development from the University of Western Ontario convinced her that exemplary mentors and role models are the best way to effect positive change in young people and this is why she has been visiting schools in Rarotonga this week offering the book and classroom resources to be used in conjunction with the book for cross-curricular studies.

So what’s the book about? The teaser on the back cover of the book says: “When Canadian triathlete Jackson Phelps moves halfway around the world to train and work at his parents’ resort on the Pacific Island of Rarotonga, he thinks his life is perfect. That is, until Emma Franklin and her family arrive to change his life for ever.

"With a deadly cyclone bearing down on Rarotonga, his whole world becomes unravelled. Life and death hang in the balance as he races to uncover the truth about a secret society with a history of cannibalism that meets in the deep, dark heart of the island.

“Will Jackson discover the truth in time to save his friends and confront the evil that has turned his tropical paradise into a living nightmare.”

If you want to know more, you’ll have to read the book – copies will be available at Bounty Bookstore or from the local libraries.

Kersey stresses all of the characters are fictional but the locations are real.

She says Phelps will be reappearing in other places around the world as his parents get posted to new locations. She has already started on book two, but is keeping the setting under wraps for now.

Teachers wanting the class resources can download them for free from www.chriskerseybooks.com.