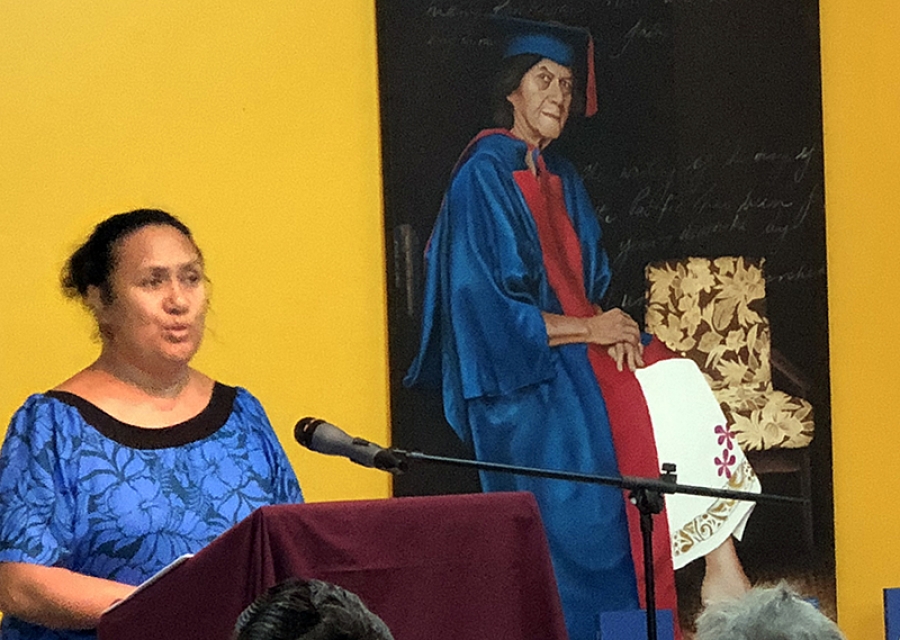 Vaine Wichman was one of a number of writers who read their work to the audience at the event. 18102819

A new anthology of Cook Islands short stories and poems, was launched at USP Cook Islands on Monday evening before a packed audience.

The new book titled “MANA – 50 years of Cook Islands Creative writing in English and Cook Islands Maori” celebrates the role of Dr Marjorie Crocombe in generating the “first wave” of post-colonial writing in the Pacific. It also celebrates the 50th anniversary of USP and the university’s role in supporting Pacific writing and publishing.

The event was chaired by Tata Crocombe.

Dr Marjorie Crocombe recounted her efforts, following establishment of the university in 1968 to create its “soul” through Pacific writing. With a number of other writers, she established the South Pacific Creative Arts Society (SPACS) and its journal “Mana”.

Those who received encouragement and support from SPACS included noted poet Alistair Te Ariki Campbell, born in Tongareva, and the renowned Samoan author Albert Wendt who sent the following message to the launch:

“Marjorie – thank you for all the dedicated and magnificent work you have done all these years for the development of our arts and cultures. Thank you and Ron (the late Professor Ron Crocombe) for all the love and help and friendship and support you’ve given me and my family. Congratulations on this great honour. Alolofa atu, Al and Reina.”

New Zealand High Commissioner Peter Marshall provided the vote of thanks, noting that the book brought together a body of Cook Islands literature that will be a source of inspiration to – and a suitable subject of study for - generations of Cook Islands school and university students.