Norman George: No such thing as a public holiday for our greats 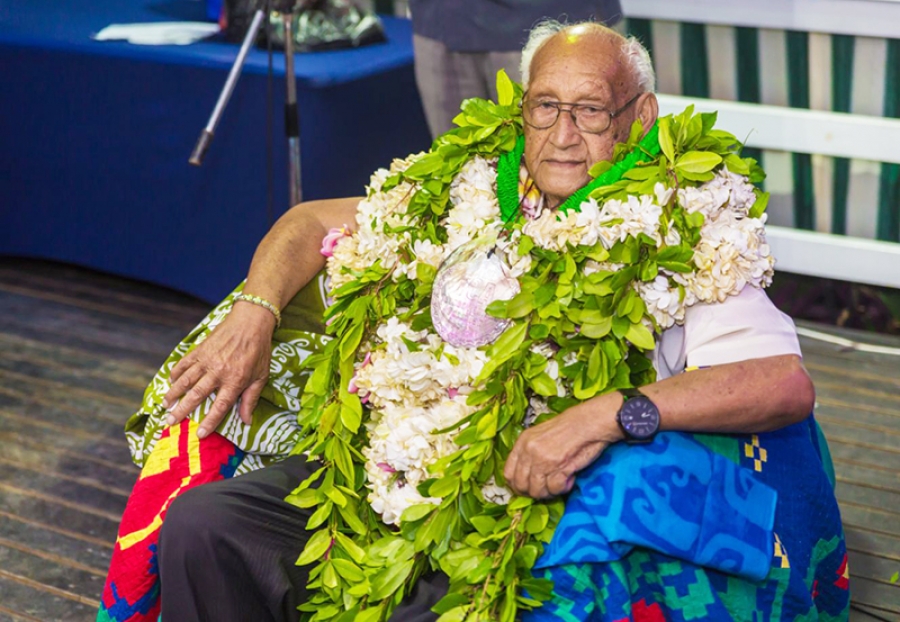 Teanuanua “Papa Dan” Teariki Kamana was surrounded by friends and family when he received his Tane Toa Kuki Airani award in 2017. 17111002

OPINION: Some of those who leave the greatest impact on their nation are those without the greatest formal credentials.

High academic qualifications are the ticket to a successful life? Not always. There are those who succeed without it. One such example is the quiet achiever from Titikaveka, Robert Wigmore.

Robert attended Titikaveka Primary School before ending his educational efforts. He told me once that he stumbled on the world of agriculture by selling akari (dry coconuts) in Avarua. He would husk the coconuts, bundle them up and transport them to Avarua on a trusted old Ford truck. They were sell-outs.

Then he added fruit and vegetables. That was when he discovered the full potential of planting and market gardening.

Robert used the Wigmore farmland in Vaimaanga to plant and cultivate fruit and vegetables. He eventually became a top farmer and exporter of vegetables to New Zealand. Robert married Tuaine Bates of Arorangi.

Their children provided additional farm labour on their farm.

Their son Arama was the youngest tractor driver I know, he was driving the family tractor on their farm at age of six years. He is now the general manager of the Wigmore Farms.

We live in the same neighbourhood, so I am quite familiar with what went on. This family worked from dawn to dusk, seven days a week. There is no such thing as public holidays on the Wigmore Farm.

Robert and Tuaine were very generous to their friends. Occasionally we would be invited to a Christmas party at Wigmore farms. They always catered excellent umu food.

No one ever left the Wigmore farms hungry or sober! Robert also shared beefsteak with us whenever he slaughtered a cow.

Robert's success grew and grew until he built Wigmore’s Supermarket. With fresh fruit and vegetables as a drawcard, the business became a great success. It eventually became a 24 hours a day, seven days a week business.

Daughter Michelle manages the business, with her mother and sisters helping.

Son Arama takes care of the farming side. The hard work continues, with the grandchildren following the footsteps of their grandad.

Robert was the epitome of a hardworking Cook Islander, quiet, not boastful, generous to a fault. He was great company to drink, eat and socialise with.

Even though Robert and I agreed to disagree on some things, he and I continued to be good friends to the end. Eternal rest and peace treasured friend.

The village of Tupapa Maraerenga is well known for its unity, ability to stick together, inclusive and tolerant of its Pa Enua community.

Their stoic, energetic approach to the preservation of village pride and success is reflected year after year by this village’s success in the sports field.

You name it, rugby, rugby league, netball, football and once upon a time cricket and tennis Tupapa Maraerenga is always at the top. The Panthers as they are now popularly called are like Golden Eagles, hovering over the sky from the hills of Vaero, to circle and guard their beloved villages.

One of the answers to their great success is the father of Tupapa Maraerenga, Papa Teanua Kamana, in short Papa Dan. A man with a gigantic reputation, imperious prestige and highly revered. He held the Mataiapo title of Tepuretu Mataiapo and has links to the senior line of the Makeanui Ariki title.

Papa Dan loved his sport. In his youth, he was a light heavyweight boxing champion, a lethal rugby centre, a gold medal bowling champion, tennis player and athlete.

He never drank alcohol. He brought up two generations of sportsmen and women, over 50 years, in Tupapa Maraerenga.

He was MP for the village for a number of years and a Cabinet Minister. Papa Dan is the father of Margaret Matenga, a champion New Zealand netballer and member of the New Zealand Netball Hall of Fame.

Sport was always in Papa Dan's blood. He is one of those lucky people who is always naturally fit. I always looked up to Papa Dan as my Metua in the village of Tupapa and Maraerenga.

I used to play some damaging rugby as a lock forward for the Tupapa A team in the 60s. Papa Dan always treated me as one of his boys. Rest in peace Papa Dan, we all miss you.

If music be the food of love, play on. Give me excess of it, that, surfeiting, the appetite may sicken and so die. – Twelth Night, Shakespeare

One last character to mention is a singer composer called Takai Ngatipa. He was of Atiu, Manihiki, Mangaia extraction. He sang his way all around the Pacific. He spent most of his time in Rarotonga, but also spent a lot of time in Tahiti.

His style was a combination of Dean Martin, Sinatra and Garbilou. The last band he played for was the Kontiki and that was in the 1960s. He can croon, tamure and patautau, turning dancers into a frenzy.

Takai was very popular with the ladies. He is reputed to have fathered more children than any other man in the Cook Islands. Today Takai lives in South Auckland, aged in his early 80s.

Diabetes has reduced him to one leg, but he still carries his guitar to the Manukau shopping centre, with a coin bowl in front of him.

He still sings and croons his way to attract audiences. I shall try and catch Takai at Manukau City on my next visit.