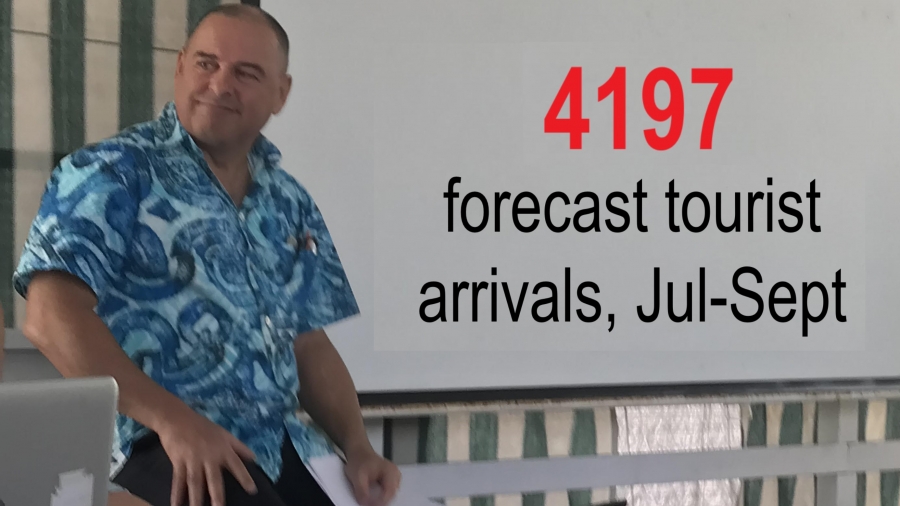 Mark Brown at the 2020/21 Budget breakfast this morning.

EDITORIAL: Cook Islands has dug deep into its rainy day fund set aside for devastating cyclones. That money runs out by September, and then we turn to the overseas banks to bail us out.

“These figures are done by the economists in the Ministry of Finance, so they’re very conservative. But they’re dealing with a Minister who is an eternal optimist.”

It’s the same joke he made last year, to the same audience at his annual Budget breakfast by the swimming pool at The Islander Hotel.

The reality of the 2019/20 financial year has turned out to be unimaginably worse than even the gloomiest of those conservative economists’ forecasts – so Mark Brown’s optimism sounds a little strained this time round.

Perhaps the most difficult assumption in this year’s Budget is the return of the tourists. 18,400 Kiwis flying to Raro between now and Christmas; 124,000 next year – those numbers would be almost back up to the giddy heights of 2019.

If those tourist numbers don’t stack up, then it jeopardises every assumption, every forecast, every spending promise that follows behind those numbers.

If those tourists don’t book their flights and accommodation very, very soon, then Cook Islands taxpayers will be paying off the Covid-19 borrowing for a generation or more.