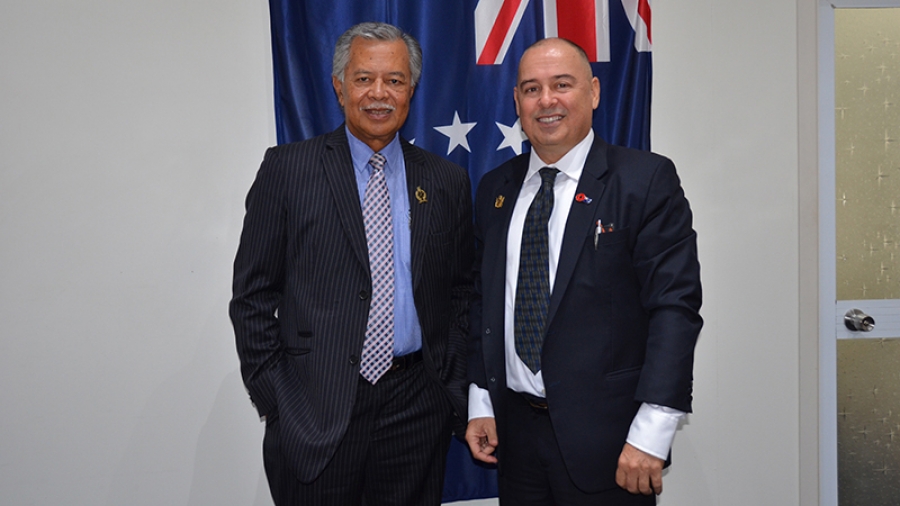 OPINION: When the Prime Minister Henry Puna resigns from that position, which September intention he has announced, he takes the entire Cabinet with him.

Unlike President Trump who looked skywards while addressing reporters on the trade war with China and declaring he is the chosen one, here in the Cook Islands we have a more temporal arrangement in the form of a Constitution, and Courts, which, if need be, ultimately decide such things.

Succession to Henry Puna's Prime Minister's mantle is not a matter of coming down to the choice of Henry Puna nor the automatic ascension of the person holding the position of Deputy Prime Minister (Cook Islands News 17.06.20). It is subject to a broader, more inclusive procedure.

The Constitution recognises a Deputy to the Queen’s Representative as it does a Deputy Speaker both of whom fill the constitutional role of the parent position in certain defined circumstances.

The Constitution does not recognise the position of Deputy Prime Minister with a similar role in fact that position is not mentioned at all rather a completely different formula is provided should another Minister be temporarily required to deputise for the Prime Minister.

And reference in the Civil List Act does not create one with any constitutional standing nor override the provisions of the Constitution and if the PM/DPM succession plans have such a dependency then I would respectfully suggest they are misleading themselves, and everyone else.

And there are good grounds for this.

When the Prime Minister resigns from that position, which September intention he has announced, he takes the entire Cabinet with him.

There are then no Cabinet Ministers nor indeed a Deputy Prime Minister to succeed to anything. The vacancy first needs to be filled, a Prime Minister appointed and Ministerial selection decided by the new incumbent and they in turn appointed. If a deputy is going to be named for the purposes of the Civil List Act that is an entirely separate exercise but make no mistake, such deputy has a far more limited role than that currently being perceived.

If Parliament is in Session the choice of Prime Minister is made there in a confidence question of all elected members however, because the Court of Appeal previously recognised the difficulty of conducting such proceedings in an official parliamentary plenary session it determined an alternative procedure to contend with the potential conflicting constitutional problem of a casting vote of a non-member Speaker.

It therefore recommended that the QR convene a formal meeting of all members of parliament at some appropriate place, possibly within the precincts of the House, or elsewhere, presided over by a person of his choice, meeting as often as necessary and following such procedures as he may direct, to ascertain what member, if any, commands the confidence of the majority of members of parliament.

As we have this quaint notion that we can, with gay abandon, go about engaging in behaviour repugnant to the Constitution and converting its provisions and parliamentary Standing Orders to suit the private political agenda of the present Administration, and, unfortunately for our democracy managing to do so with impunity because no-one has been prepared to take the challenge into the Courtroom, the fact of the matter is that despite the current parliamentary session beginning on 19 September 2018 it is still, oddly, continuing, we now having just adjourned the eighth meeting of it.

That leaves little doubt therefore that Parliament is still in session and members would need to be recalled, if it has not sooner resumed, to determine confidence and PM Henry Puna's replacement. If such resumption does not coincide with the timing of the Prime Minister's actual resignation, recall should be arranged to allow for the logistics of members' travel and a minimal hiatus in the executive government.

Such a procedure, of course, aligns with the proper constitutional and democratic process rather than Puna and Brown promoting the matter as theirs personally to decide.

And, as we have seen in NZ politics recently, no-one’s position is guaranteed and the process outlined above should bring home the point that the changing of the guard is not a foregone conclusion and any member could be a candidate and our next Prime Minister.

I have no doubt all the above will be subjected to some very close scrutiny so comments by those more qualified than I will be awaited with interest. Although I do not believe the situation warrants calling on traditional overseas expertise the absence of any other challenge over these last several weeks, and the folly of allowing the matter to acquire even some pseudo legitimacy, might suggest that it should be.