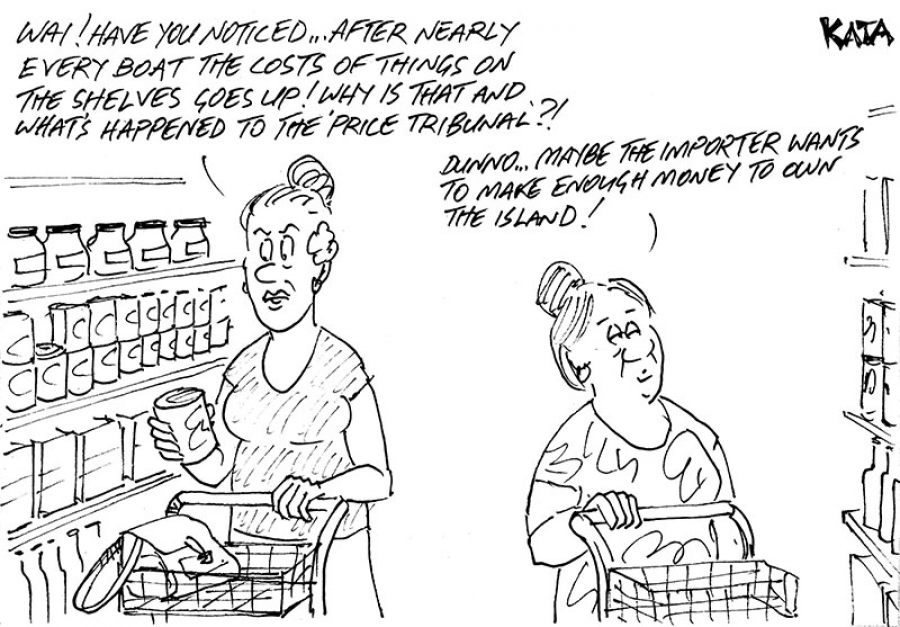 John Scott says: Kata's cartoon (CIN 21.09.20) says it all. Price Control, Commerce regulation and import levies protection abandonment have all effectively received their seal of fate from this CIP Government.

OPINION: By way of introduction let me quote a few of the grand plans, goals and objectives of the Cook Islands Party from its Manifesto and National Sustainable Development Plan.

Reference: the 'Together We Can' Manifesto:

Under the heading Sustainable Growth:

- Organise the Agriculture Industry into an Incorporation and build capacity for consistent supply of quality local produce to support import substitution initiatives.

- Promote the concept of growing our own food and lowering the cost of living.

- Strengthen opportunities in... and Agriculture.

- Establish a Commerce and Consumer Affairs Department to strengthen consumer protection and provide effective registration and monitoring for business.

Against these lofty ambitious declarations how successful have we been?

Until Covid-19 came along we would never have seen the recent resurgence in the planting of fruit and vegetables which unfortunately is happening with minimal planning, guidance and oversight by the Ministry of Agriculture and is haphazard and duplicating and I worry for the growers at the looming flood of like product on the market and achieving an economic return.

In a properly managed economy we should not be seeing this reactionary burst of activity but rather a continuation of what we should already have been successfully doing so Government can claim no credit there.

I keep harping on about eggs and pork and other livestock possibilities but government you would have noticed is staying right away from those subjects meanwhile pretending to be addressing its goals with a selective token effort through its agriculture support package for growers and home gardeners.

Vegetables, however, are still been imported and sold at outrageous prices.

If agriculture were receiving consistent support during regular times, and if controls and monopolies and market power had not been hijacked by the big players it would be local produce on those shelves not imports.

I remember a Wigmore’s spokesperson answering a question I put some time back as to why their broccoli was not been sold at CITC and the response was that they would not take them. We had the same experience with our eggs.

Imports provided the opportunity for better margins, meaning greater profits, especially in the absence of any price control which had been successfully torpedoed. Yesterday's price for broccoli at CITC was $19.90kg!

Had a Commerce Bill not been deliberately withheld from Parliament for the best part of these last 20 years on a variety of unconvincing pretexts those things would never have been allowed to happen.

Kata's cartoon (CIN 21.09.20) says it all. Price Control, Commerce regulation and import levies protection abandonment have all effectively received their seal of fate from this CIP Government.

At the very least one would have thought that Covid-19 and the impetus this created to devise economic response plans, would have stirred some realisation in someone in government that its unhealthy alignment with vested interests not only was inconsistent with all its above quoted high sounding goals and policies, and regardless should be reviewed, but that Covid-19 provided a brand new justification and imperative.

Despite a perfectly reasonable proposition from me in your letters column (30.03.20) suggesting to Minister Brown that to give tangible expression to his appeal to consumers to support local businesses he should take appropriate action to avoid local producers having to cope with continuing egg imports it never happened.

The flood just continued and last Friday reached a point where our further eroded market share could no longer survive this further evidence of his determination to be unmoved and swayed from his senseless policy and I instructed my staff to close down a perfectly good laying shed that was producing just under one thousand eggs a day.

The shame of all this is that Sir Geoffrey Henry, whose parliamentary seat Minister Brown now occupies and who endorsed him, believed in import substitution and, as opposed to Mr Brown's lip service to it, encouraged our commitment as far back as 1983 when we began egg farming and throughout his parliamentary career remained an unwavering supporter and champion of what we and other local farmers were doing.

He was vindicated in our success. Now it is Mr Brown who is dismantling all those gains and one needs to ask why.

And this is the man who cannot wait to be Prime Minister and was prepared to subvert the Constitution in his race to get there.

People need to read some of the chapters of Iaveta Short's book which are a revealing condemnation of those one-eyed policies of the Albert Henry era where government looked after its friends and supporters and destroyed the lives, businesses and careers of those who spoke out against it and could not be bought, cajoled or intimidated.

One might then ask are we just now doomed to be repeating the errors of the past?

- John Scott is the owner of Scott Farm