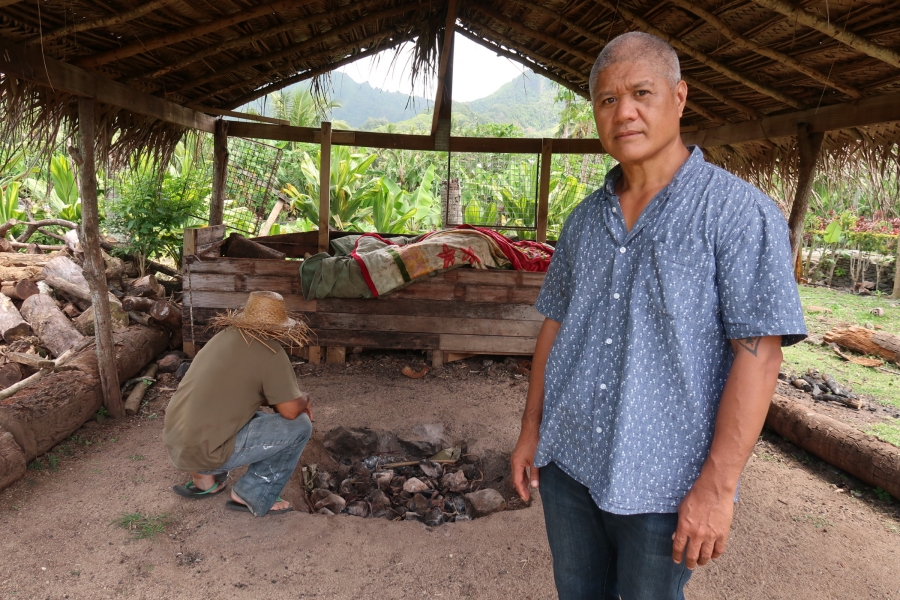 Convicted killer Ngaakitai Taria Pureariki, left, and his business partner Terry Rangi, at the Umu Experience tourism venture that Taria is allowed out from prison to run.

OPINION: In Corrective Services and in the prison at Arorangi there are honest men and women of integrity – prison officers and counsellors and chaplains and more – working very hard to solve the problem of rehabilitating violent criminals. But they can’t do it on their own.

First, I want to apologise. I know the article we carry today will be distressing for many of us. It is an interview with an Aitutaki man who, little more than a year ago, beat his 9-year-old grandson to death. It is graphic, and necessarily so.

So if you need support for yourself or someone you know, you can contact:
* mental health support organisation Te Kainga O Pa Taunga on 20162, or 50633 in emergencies; or
* counselling centre Punanga Tauturu Inc on 21133, or 55973 in emergencies.

Secondly, I want to explain why we’re running this interview with Ngaakitai Taria Pureariki, a man whom many would probably like to see locked away for ever.

But how much do we really know or care about the reasons people commit crime? I’m not making excuses for them – but the fact is, if we can identify and minimise contributing factors like child abuse, then we may be able to reduce criminal offending in the future.

Finally, we need to discuss how best to punish criminals. Because it’s expensive and futile locking away every petty thief for long stints; even violent offenders like Taria must eventually be allowed out.

And as Taria’s friend Terry Rangi says, this is a very small community: “You don’t want them to be angry people who’ve been locked up 24 hours a day and then be out in the community.”

That means we have to think smarter about providing training and rehabilitation so the 45 men and women in our prison, and all those who follow them, can actually make a new start in life.

I know that in Corrective Services and in the prison at Arorangi there are honest men and women of integrity – prison officers and counsellors and chaplains and more – working very hard to solve this problem. But they can’t do it on their own.

First, they need to make good evidence-based decisions on whether people are ready for work release; it's not yet clear that this has happened in the case of Ngaa Taria. After all, he was out on day release barely six months after being sentenced to six years' prison for killing his grandson and attempting to cover up the death.

Then, they need the backing of their community – they need us to be a little bit brave. To say, yes, we as a community will trust your judgment and take a risk on letting these people rebuild their lives – out in the community again.

There will be more community and political discussion around the day release of Ngaa Taria; he and the wider public will be praying that good process was followed and that he is indeed safe to be out in the community again. For now, that is an open question.