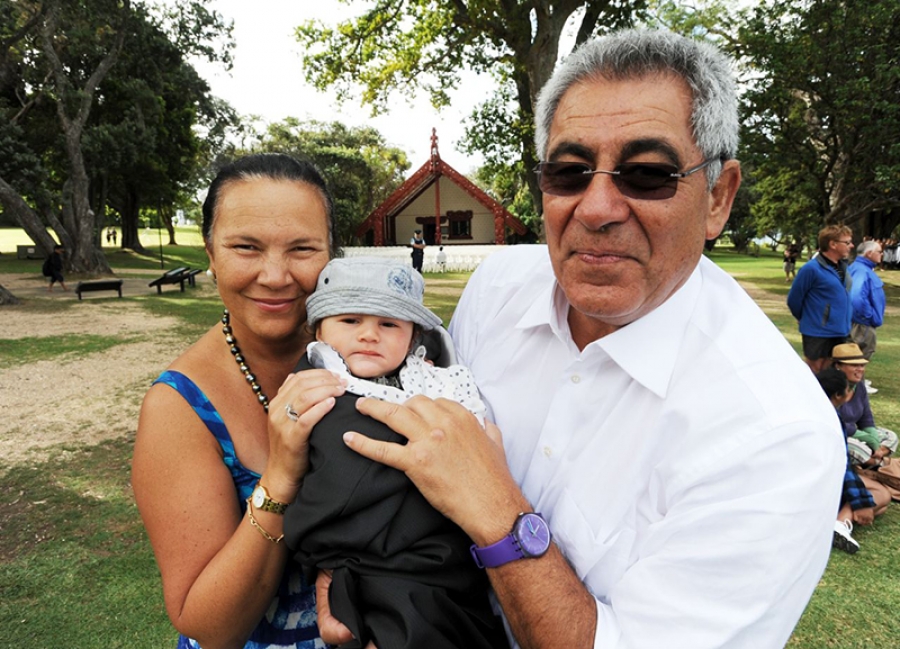 Derek Fox and Jaewynn McKay with son Tinirau at Waitangi. 20012843

OPINION: One hundred and eighty years ago next Wednesday in Rarotonga, Thursday in Aotearoa – the Treaty of Waitangi was signed in the Bay of Islands.

Captain William Hobson, then 47 – who had joined the Royal Navy when he was 13, signed for the British.

Forty-three Northland Chiefs signed on behalf of their people.

Hobson’s navy career, which included fighting the French, pirates and slave traders in the Caribbean, had been offered the Lt-Governorship of the not-yet established colony of New Zealand in 1839.

He put off giving an answer for a couple of months, hoping instead for a more senior naval position, but when it didn’t happen he accepted.

He only arrived in the then independent Aotearoa on 29 January 1840; and had specific instructions on how he was to treat the local people, with fairness, and that the acquisition of land for settlers was not to be forced, but rather facilitated through a treaty.

The government would buy the land off Maori and on-sell at a profit to finance the new colony.

After his arrival, in conjunction with people like the British Resident – James Busby - and missionaries, a treaty was drafted and then hastily translated into Maori.

The missionaries knew the Maori version would be very important as it would be the one Maori would most understand, it was important not to push the fact that sovereignty would pass to the British; and imperative to assure Maori that their land and possessions would be protected.

About 500 Maori came to the hui called on February 5 to announce what the British intended. It was a long drawn out affair with the missionaries answering many questions and the locals entering into heated debate.

The early speakers were against signing, but influential Chiefs like Tamati Waka Nene and Hone Heke, who the missionaries had got to earlier, spoke in favour and they swung the tide; although many disgruntled chiefs packed up and went home. Others threatened to go home too because there was a shortage of food for the gathering.

So the signing, which after an orderly discussion and deliberation might have been done on February 7, was hastily brought forward to February 6, the date now etched into New Zealand history.

Within a week it was apparent that the two versions, English and Maori, did not say or mean the same thing, but notwithstanding that, in the end, over the next 8 months or so, about 500 Maori signed the various copies of the treaty taken around the country.

I’ve lost track of the number of times I’ve been to Waitangi around Waitangi Day, as a journalist and sometimes as a private citizen.

But for almost all of those years it has been a day marked with controversy – real or imagined – and played out on television or radio and in the papers, that night and the following days.

The Treaty and the day have both had their ups and downs over the years.

When people like Shane Jones and Hone Harawira were young and marched on Waitangi in protest, the catch cry was ‘the Treaty’s a fraud’.

Later when the courts, the government and the Waitangi Tribunal determined that it wasn’t a fraud after all, the placards changed to, ‘Honour the Treaty’.

Interestingly both those young men became MPs when they grew up. Jones is currently a Cabinet Minister.

For many of the people who protest at Waitangi, it is the only opportunity they can see to express their discontent. Waitangi is the pressure valve that allows them to let off steam.

It is estimated that more 80,000 Maori of voting age are not on the electoral roll.

Those people don’t take part in New Zealand’s government processes; nobody represents or speaks for them. Who are they? Well they’re mainly young. They’re poor, disaffected, and probably jobless, they’re certainly anti-establishment. They don’t engage because they don’t think they can make any difference to the ‘system’. They may also be under-educated, suffer ill health and may have had a brush or two with the law – a law that they don’t accept or respect.

One child in three in New Zealand – once called a land of milk and honey – now lives in poverty.

As someone who has had a crack at politics a couple of times, and failed, it is so sad too to see how so many people – maybe understandably – have turned their back on the political process. They don’t think they can make a difference, but they could.

Again it was estimated some time ago, that if all Maori eligible to vote enrolled they could double the number of Maori on the roll. If they then chose to go on the Maori roll and Maori on the General roll joined them, and if they all voted for one entity, they would win 23 or more seats.

A party commanding that number of seats would hold the balance of power in the New Zealand Parliament, and nobody would be able to govern without them. They would be in power every time, not just once a decade or so when Labour gains the upper hand.

I know that involves a lot of ‘ifs’, too many it seems for the disaffected to comprehend right now.

Neither of the main parties in New Zealand has seriously tackled getting disaffected Maori on the roll, because as the late Parekura Horomia once told me: ‘We don’t know who they might vote for. We do know who the ones on the roll now vote for.’

Much is made of what the present political parties call “our democratic system”. Ask a New Zealander what democracy means and 9 out of 10 will say ‘one man, one vote’, which is wrong.

Democracy is Government of the people, by the people for the people. One-man, one vote is just one crude way of trying to give effect to a democratic process.

New Zealand has already abandoned that anyway, now having a ‘one person, two votes’ system.

And simply having a majority of supporters doesn’t satisfy the test of democracy either.

True democracy requires everyone to participate in the governance of the country, and to feel like their views and issues are being addressed. It will not be achieved in New Zealand until a way is found to involve the disaffected.

Pushing tens of thousands more poor people into that disaffected pool simply further increases the gap between ‘haves’ and ‘have-nots’.

The protests that the media almost always focus on at Waitangi normally take place in an area about 30-metres-square in front of the wharenui at Te Tii, on the lower marae.

Outside of that area, thousands of people attend the festival that is Waitangi without seeing or hearing a single protestor.

There are stalls and entertainment and waka being paddled or sailed on the estuary or the bay, kids are jumping off the bridge – despite signs urging people not to - and others a frolicking in the benign surf lapping on the beach.

Marae, kohanga and kura sell kai as fundraisers, hauora and other social service providers advertise their wares and services; Maori businesses do the same, and it can be a fun day.

William Hobson was 47 when he arrived in Aotearoa. He came with instructions to treat fairly with Maori – who with the encouragement of the British resident James Busby had declared an independent nation in 1835, to stave off a move by the French to colonise the country. He did his level best to achieve that.

Hobson had a tough job, it took nearly a year to communicate with head office in ‘Mother England’; he may have been the Governor but he had only one British ship and a few soldiers brought in from Australia, with which to exercise his authority.

The new colony was established by the end of 1840, but at a price, Hobson had suffered a stroke.

He recovered and pressed on with his work. The pressure on him was great as he trod a fine line between Maori and ‘land-hungry’ settlers.

Eventually it got the better of him, he had a second stroke and died. He was just 49. He was buried in the newly developed cemetery in Grafton Gully in Auckland the capital of the colony he’d created.

180 years on it would be very interesting to hear Hobson’s thoughts on how the colony has developed and what has happened to that day in history which he was such a pivotal part in.