Signing of the times with China 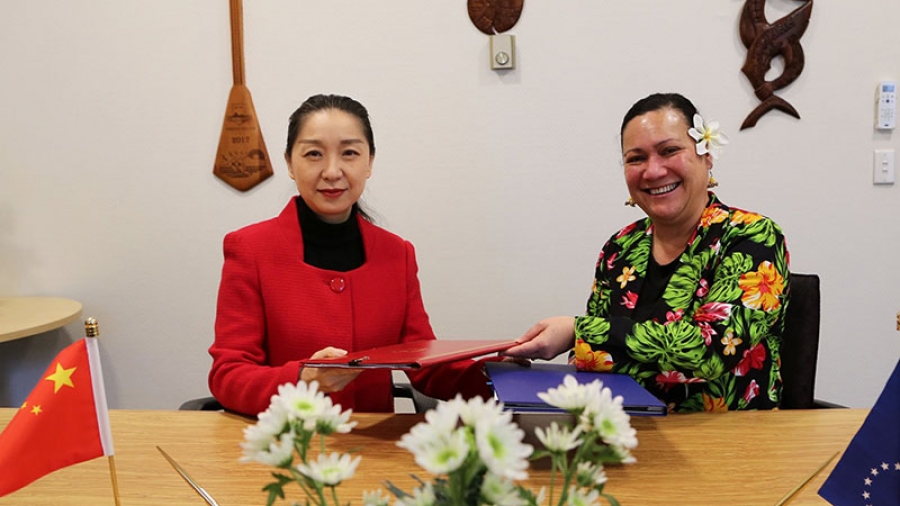 Chinese Ambassador Wu Xi and Cook Islands High Commissioner to New Zealand Elizabeth Wright-Koteka, who accepted a donation for Covid-19 protective equipment on behalf of the country in July. 20072034

As other nations condemn China for its ‘draconian’ security crackdown, the Cook Islands High Commissioner poses for handshake and photos.

China is committed to support the Pacific Islands in the fight against the Covid-19 pandemic, says that country’s ambassador to the Cook Islands.

This follows China’s donation of personal protective equipment to Cook Islands, and other Pacific nations.

The two country’s top diplomats met in Wellington this month to sign a pact to accept China’s gift.

Those supplies came at a time when Cook Islands was focusing heavily on preparing for the worst-case scenario, and the confirmation of support and the provision of protective equipment that could help to save lives was timely and reaffirmed the country’s strong relationship with China.

The medical supplies are intended to help the country to be medically prepared for the Covid virus.

Ambassador Wu Xi said the provision of the supplies was just one principle of wider support that China has provided to the Cook Islands over the years.

She added that since the outbreak of Covid-19, China had shared its own experience with Pacific Island countries through a health experts virtual conference and the Vice Ministers' Special Meeting on Covid-19, and it had provided much-needed medical materials for the prevention and control of the pandemic.

“China is committed to continued cooperation with and support to the Pacific Island countries in the fight against the pandemic,” she said.

China’s work to improve relations in the Pacific has been especially evident in countries like Cook Islands that have signed up to its Belt and Road foreign policy initiative, and that support its position on Taiwan as part of a greater China.

It is in stark contrast to its current tensions with New Zealand, which has this month condemned a draconian new Chinese national security law in Hong Kong.

Speaking at the China Business Summit in Auckland on Monday, New Zealand Prime Minister Jacinda Ardern insisted the New Zealand-China relationship was in good shape, but delicately acknowledged “different perspectives on some issues”.

New Zealand attracted China’s anger in May when it backed Taiwan’s push for an observer role within the World Health Organization, then again this month when Foreign Affairs Minister Winston Peters announced a review of New Zealand’s relationship with Hong Kong after Beijing lawmakers rammed through the new security law.

New Zealand, Australia, the UK, 15 European Union nations, the US and Canada are among 27 countries that have condemned the new security law – but Cook Islands is not one of them.

Ardern said New Zealand’s positions on Taiwan, Hong Kong and the treatment of Uighur Muslims in Xinjiang were important to Kiwis’ identities. “It is, then, quite natural for us to raise concerns about Hong Kong’s security law - we believe we are representing real and actual issues for New Zealanders.”

But Ambassador Wu hit back, speaking at the same forum. While the fundamentals of the New Zealand-China relationship were strong, Wu said, “we should not take our relationship for granted, [and] we should make sure that our bilateral relations are immune from various viruses in these trying times.”

“China has always followed the principle of non-interference in others' internal affairs. At the same time, China stands ready to...safeguard its core and major interests. Issues related to Taiwan, Hong Kong, Xinjiang and Tibet all touch on China's sovereignty and security and these are all China's internal affairs.”