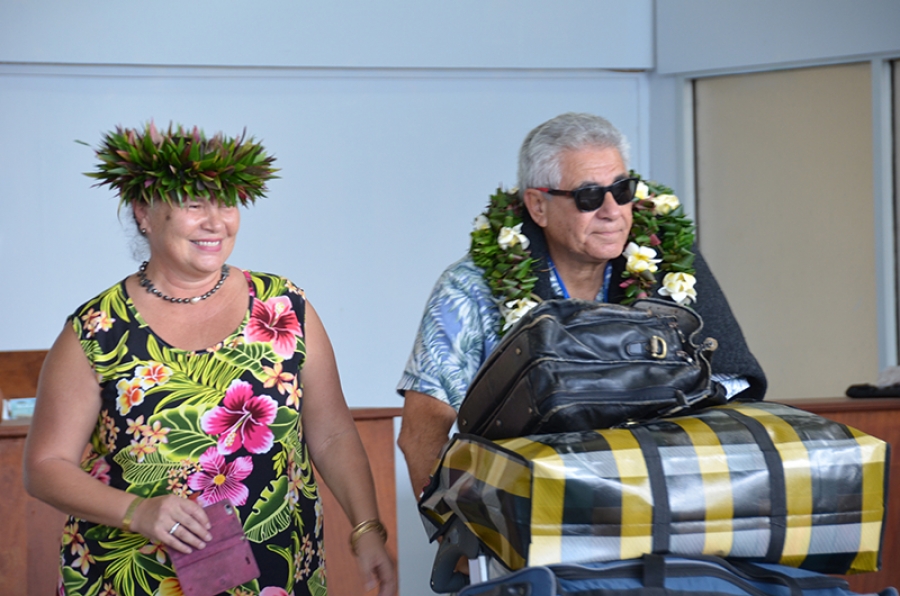 The joyous return of 131 Cook Islanders and work permit holders yesterday was a far cry from the controlled distance of the three previous repatriation flights.

It was like the finale of the movie Love Actually.

Families happily hugged their loved ones in the arrivals area of Rarotonga International Airport yesterday afternoon.

The Air New Zealand flight from Auckland was only half full, but what they lacked in numbers, the 131 passengers made up for in smiles.

The Apostolic church choir greeted the travellers with heart-warming island songs, accompanied by ukuleles. They were joined in by appreciative families and friends who were overwhelmed to finally greet their loved ones, after many trying months.

Most had been away since February or earlier, though among those returning was Secretary of Health Dr Josephine Aumea Herman – she flew out of an empty, cordoned-off airport on April 17. Much has changed since then.

Emotions were high with hugs and tears of joy some tinged with relief, some with sadness, with an abundances of customary beautiful colourful scented ei.

Waiting families were cautioned not to embrace the incoming passengers – but that was not to be – it was hugs all around!

This was the first flight home since the border closures, on which passengers don’t have to undergo 14 days of isolation at the Edgewater quarantine resort.

“This is unfortunate,” said Dr Herman. “However we are confident that the New Zealand Ministry of Health has put in measures to identify and mitigate any public health risk or threat to the New Zealand public.

“We will continue to monitor the situation.”

Health ministry Te Marae Ora and the Private Sector Taskforce launched a trial of a contact tracing name CookSafe this week. Anybody can sign up to the trial at the Tarkforce or Cook Islands Tourism office.

They then swipe the QR code on their card or cellphone at retailers and food outlets like Raro Fried Chicken The Island hotel, and LBV in Muri.

“This is the reality of the ‘new norm’ we are going to have to navigate,” she said.

“Te Marae Ora is steadily strengthening our systems and ability to rapidly respond to such situations in order to maintain our Covid-19 free status.”

Two of the passengers were medivac personnel from New Zealand, who did not disembark – instead they returned to Auckland with a patient.

Among those on the aircraft was former Cook Islands High Commissioner to New Zealand, Tiki Matapo and his family.

He has returned home with the body of his late wife Miimetua (Aunty Mii) Matapo (nee Tikitau), who passed away at Auckland Hospital late last month.

Due to the Covid-19 restrictions, her family were unable to bring her home earlier.

A former nurse, Mii was the county’s first matron and she served in that role until her retirement in 1993; she will be laid to rest at her home in Tikioki on Monday.