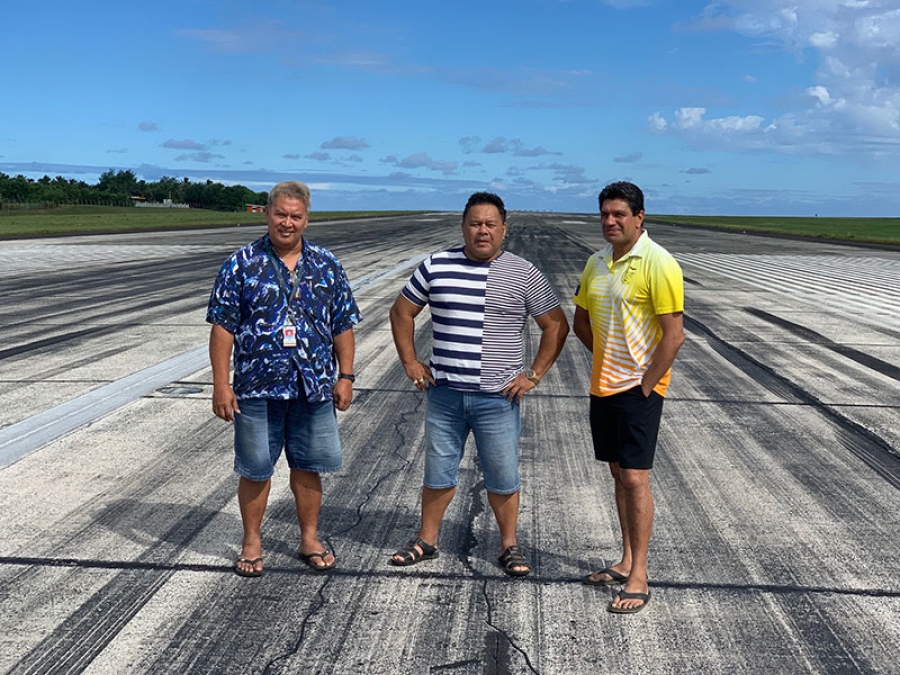 Airport Authority chief executive Joseph Ngamata, board chairman Taoro Brown and vice-chairman Ianis Boaza stand in the spot where work will start to replace 58 cracked slabs on the airport runway. 20041735

Rarotonga airport will come back to life with work to replace 58 cracked slabs on runway and negotiations to acquire land to extend the runway.

Instead of accepting defeat and closing down until planes start arriving again, the Airport Authority will take on new projects to keep busy and contribute to the local economy during the downturn caused by the global pandemic.

Prior to Covid-19 putting a stop to all international travel, the Airport Authority was set to replace 58 cracked slabs on the runway at Rarotonga Airport.

Chief executive Joseph Ngamata, board chair Taoro Brown and vice-chair Ianis Boaza had been behind the scenes working on plans with engineers from New Zealand, who had visited before the borders were closed.

With up to 29 international flights arriving in some weeks in peak season, it wasn’t a matter of how the work would be completed, but when it could be done.

Gaps between flights created small four-hour opportunities to replace the slabs, but only with a quick-set specialised concrete mix that had been trialled on runways in Melbourne and Auckland.

The equipment would have been brought in from overseas – but Covid-19 changed everything.

Ngamata said the new $6 million plan was for local contractors to complete the work, which would start as soon as an engineer in New Zealand confirmed the plans.

Ngamata had become an “expert in concrete”, he laughed, and the mix needed to be right the first time.

Board chairman Taoro Brown said there was no room for error: not only would it costs hundreds of thousands of dollars if they get it wrong, but it could also cost lives.

“We are talking about the safety of people here – that is the most important aspect of all,” he said.

Damaged slabs will be removed by a crane and it will take up to four days for each new concrete slab to fully set.

The two worst affected slabs at the Nikao seawall end of the runway will be replaced first.

Other projects include acquiring land to extend the runway. This is a work in progress with negotiations taking place with the land owners.

Maintenance work, which was previously done by private contractors like mowing the grass strips and clearing the stormwater drains are now being done by airport staff with onsite equipment.

Ngamata predict there would be no more than one flight a week until at least June.

Although Covid-19 had created a lot of problems, Ngamata said, it has also created some opportunities. “We had to think about proactive ways to keep our staff in work and to contribute to the local economy.”