Saturday 23 May 2020 | Written by Rashneel Kumar | Published in Economy 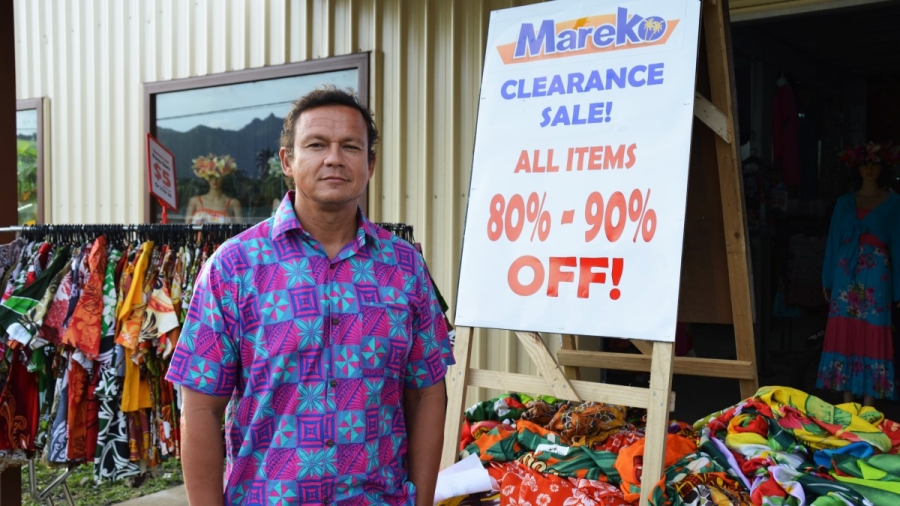 Mareko Island Creations owner Mark Sherwin is running a clearance sale to generate some income at his Tutakimoa shop.

One-fifth of companies say they are considering shutting down, and need the tourists back.

At the beginning of the year, Mark Sherwin had 13 staff working at his three thriving clothes and souvenir outlets on Rarotonga.

That all changed when the Covid-19 crisis hit Cook Islands’ tourism industry. Sherwin was forced to close down two of his Mareko shops and let go five staff after sales dropped dramatically.

A survey from the Private Sector Taskforce reveals a fifth of Cook Islands businesses are considering closing their doors due to the impact on tourism from Covid-19.

Sherwin admits he is facing a tough challenge in keeping his business afloat and his workers employed. He has ventured into online sales which is bringing some much-needed revenue.

Sherwin is also running a clearance sale with 80 to 90 per cent discounts on items to boost revenue.

The wage subsidy from government, he says, is helping him keep the remaining eight workers on the payroll.

“Everyone around the island is going through some difficult times. We are just trying to keep the business floating until things return back to normal.”

Businesses such as Mareko’s are now looking for some certainty from government over the reopening of the borders.

Fletcher Melvin, the Private Sector Taskforce chairman, said they were pushing for the borders to reopen in July and for the country to be part of the “bubble” being proposed by New Zealand.

Melvin said government should start to have “a date in mind” so that businesses can begin making decisions on finances and other logistics.

They have been using this time to get ready, but they need something concrete to aim for.

“It’s all about opening the border. If New Zealand has no cases and we can get into that bubble and really push for the opening of the border, this will be a massive amount of hope for us. Things will start to change,” Melvin said.

“If that doesn’t happen then it will get worse.”

The economic response survey carried out by the Taskforce earlier this month also reinforced the critical importance of ongoing support for business and workers in the form of wage subsidies and business continuity funding.

Businesses say generating revenue, managing operational costs and payroll are their top three concerns right now. They want the government to focus primarily on wage support, followed by grant support and tax support. They regard training as a lower priority.

Melvin said businesses would still require government support after the borders had reopened and visitors were allowed into the country.

“It’s sort of phase thing because when tourism opens up, we are not expecting there will be a rush in tourism so it might start at 20 per cent then the numbers rack up over a year. That’s how we see the government support phasing out over that time as numbers increase the support decreases. I think that’s a very responsible way of doing this.”

The big issue businesses were grappling with now is that they continued to burn through cash even in hibernation.

“They still have to pay for electricity, superannuation contributions, insurance, rent, and telecommunications among other things. That money has to come from somewhere,” Melvin said.

“There’s a strong case for continued wage subsidies and business continuity support as it’s a critical lifeline with so many businesses struggling to keep their head above water.”

It drew responses from a wide cross section of local industries, including agriculture, marine, culture, crafts, retail, restaurant and food and market huts.