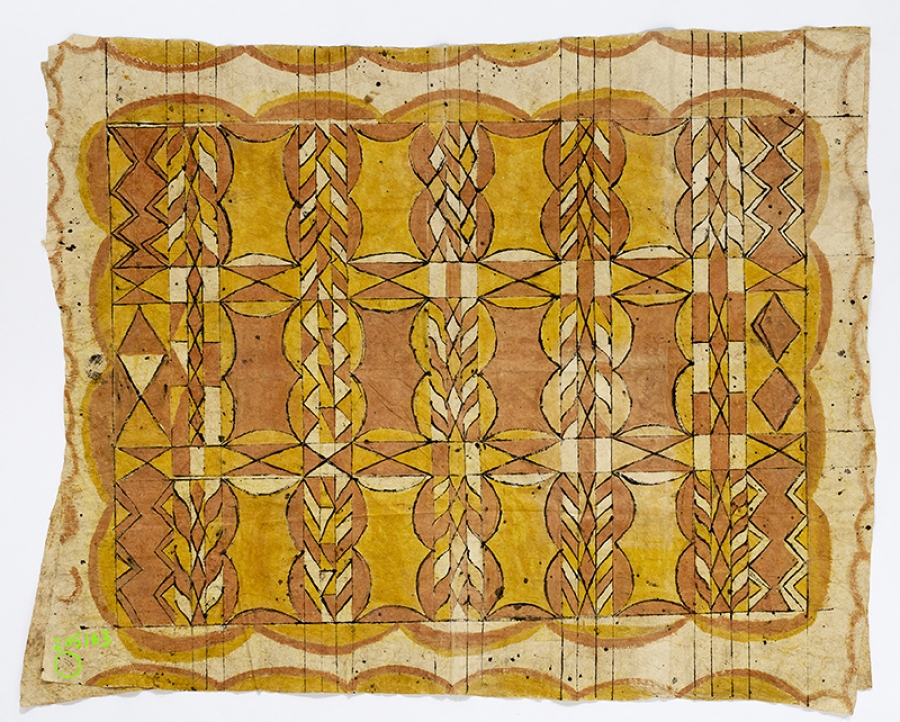 An exhibit of the pā'oa at the Smithsonian Museum in Washington DC. 19102519.

Aitutaki pā’oa (bark cloth) deserves its resurgence. There is desperate need for it to be demystified and “modern day” women to breathe new life into it, writes Dr Tepaeru-Ariki C. French.

Tapa is integral to lives across Te Moana-Nui-A-Kiva and its island nations. However, so has it been for many non-Pacific led exhibitions.

These significances span across centuries of rituals, customary practices and beliefs and its everyday functional utility. Inevitably, changes occurred with the arrival of foreigners; Europeans bringing with them Christianity, colonisation and like many of our sister islands, consequential irreversible cultural effects – including extinction.

One example of this is pā’oa (bark cloth) from my home island Aitutaki.

I decided to turn to the ancient stories of my home land when receiving an invitation for participation in an annual dance festival held in Auckland, New Zealand by Pacific Islands Dance Fono Trust.

The story of Te Pou O Nukunoni was read to me by my mother, and having heard only parts of this story whilst growing up, this was the first time I had heard it in its entirety.

Te Pou O Nukunoni recounts the vengeance sought by the village Vaipae against the neighbouring village Nukunoni. Returning from Nukunoni, Mataikatau (a woman from Vaipae) was assaulted by men from Nukunoni and her husband led the campaign in Vaipae for a planned vengeance against Nukunoni, punishing them for this transgression.

Vaipae had deceptively invited the village of Nukunoni to partake in the process of cooking the roots of the green ti (Cordyline terminalis) a common communal activity showing unity of people and villages. Distracted with the tasks of putting their ti roots into the umu (earth oven), Nukunoni was unaware that Vaipae had intended the umu for the people of Nukunoni.

Fortunately for Nukunoni, Vaopa’aki a warrior had escaped and as Nukunoni repopulated, plans were set in motion to avenge the lives of those murdered by Vaipae. When Vaipae became aware of these plans and their most certain annihilation by Nukunoni, Vaipae set to task preparing. This involved the gathering of scented plants and herbs which were sun-dried, pounded then finally it was infused into an Aitutakian pā’oa.

Wrapping a woman from Vaipae in the pā’oa, she was sent towards the village of Nukunoni “capturing” the interest of the lead warrior Vaopa’aki. This resulted in ending the vendetta between the two neighbouring villages.

The story identifies a woman as the cause of the destruction of Nukunoni and also the saviour of Vaipae. A woman knowingly risked her own life for the survival of her village. A woman with only pā’oa as her weapon from my perspective is the unsung hero of this story, and I was determined to relay this to an urban audience.

The history of our land has been reduced to mere old-time stories, told and written from the male perspective oppressing the bodies of women and trivialising their ancient practices. To this day, the names of Mataikatau and Vaopa’aki continue to live through generations of descendants, the location of the umu ti is known however, the woman - the ‘saviour’ and her pā’oa remain nameless and lost.

In historical terms, pā’oa predates the world-famous and renowned church-based quilting, tivaivai. I struggle to accept this truth, yet as aforementioned, these are consequences of Western influences. Evidence around us suggest that pā’oa has been transformed into our pareu, our bedspreads, screen or roll printed on carved boards using imported synthetic fibres and dyes; one could speculate this is our modern day pā’oa.

The only written history of pā’oa with the exception of Te Pou O Nukunoni, comes from anthropological analysis documented by Te Rangi Hiroa, under commission of the New Zealand government. According to Te Rangi Hiroa, descriptions of the process involved in the making of bark cloth were centred on women (Hiroa, 1927, pages 80-81). Women also were the knowledge holders of pā’oa (Hiroa, 1927, page 76). We can then state with almost certainty that although men and children may still have a role in other processes or steps such as harvesting the raw materials, creating the tools such as the ‘ike – beater and tutunga - anvil, pā’oa remained a female-lead domain. Therefore, not only is this a form of providing the materialistic needs of daily life and customary practices, it is also very much a form of pride, expression and artistry.

In early 2019, a group of Cook Islands individuals based in Aotearoa, New Zealand formed a collective dedicated to the research, revival and perpetuation of Aitutakian pā’oa. We continue to challenge our thinking amongst ourselves in all areas pertaining to pā’oa.

Reclamation of our lost heritage ensures it remains within our possession for Aitutakians to exhibit. This has become a call to unify all women of Aitutaki and the Cook Islands, to take back, revive, relive and reinvigorate pā’oa.

· Daughter of an Aitutaki mother and British father. Tepaeru-Ariki C. French was born and raised on the island of Aitutaki. She is now an Auckland-based practising medical doctor, artist, performer and mother. Tepaeru-Ariki also holds a Master’s degree in Science and is a qualified secondary school teacher of Science and Biology. She has national and international performance experience and continues to weave both passions of art and medical sciences into her everyday life.