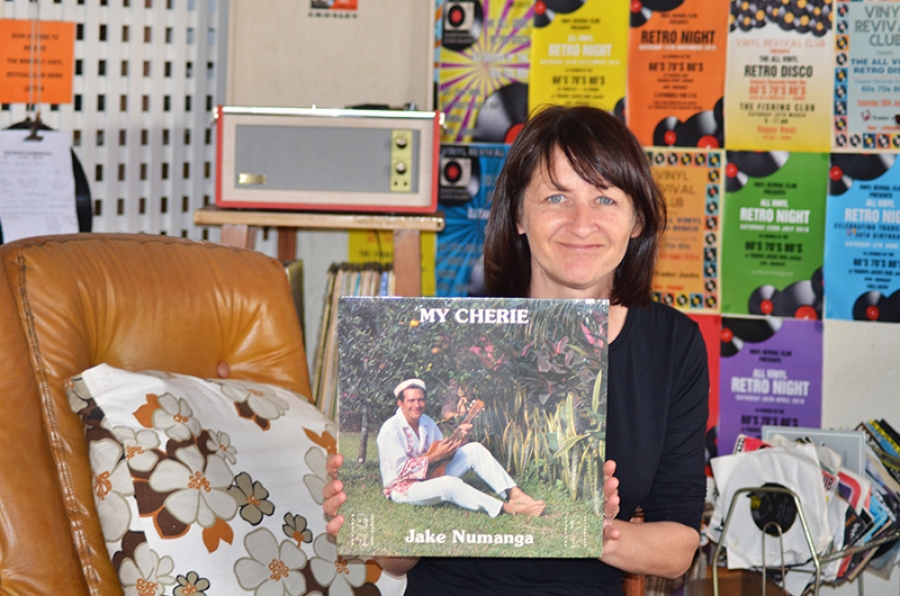 My Cherie, home from Sweden and in safe hands with Clare Wheeldon from The Café. 18091906

A love of music and collecting vinyl records has led Ian Wheeldon, of The Café in the Beachcomber complex, to a rare Rarotongan record by local artist Jake Numanga.

“I was doing an internet search, looking for Rarotongan records to add to the Café’s collection, and came across Jake’s record, My Cherie. It was in Sweden, of all places, and I think it cost me $20 for the record and $15 to have it posted here.”

“We absolutely love it,” says The Cafe manager, Ian’s partner Clare. “Actually, everyone loves it. Lots of people have come in to listen and recognise the old songs on it. It fascinates me, that we searched here and New Zealand, but it turned up in Sweden.

“We would love it if he came in and signed it.”

“I think I put out about four or five records in the early days,” says Numanga. “Mostly local songs. It’s hard to remember, but I think I should have a good hunt around to see if I can find any of them.”

He says he also might go along and have a look at the record at The Café and maybe sign it.

Wheeldon says many of the records featuring traditional Rarotongan music, along with a collection from the 60s, 70s and 80s, are played at the two-monthly Vinyl Retro disco evenings at Trader Jacks.

But she says many locals also come to The Cafe - and the mamas particularly like the Pacific Islands music collection.

Jake Numanga’s record was produced and distributed by Electrotek Ltd, Rarotonga, in 1978. It features 14 songs including My Cherie, South of the Border and a selection of traditional songs including Akaiama, Fare Niau, Uri Tamo Te Matangi as well as one that Jake wrote called Tangaroa.

“There’s really nothing like the original sort of scratchy sound of a record, it’s distinct,” says Ian.