Passion for ukulele runs in the family 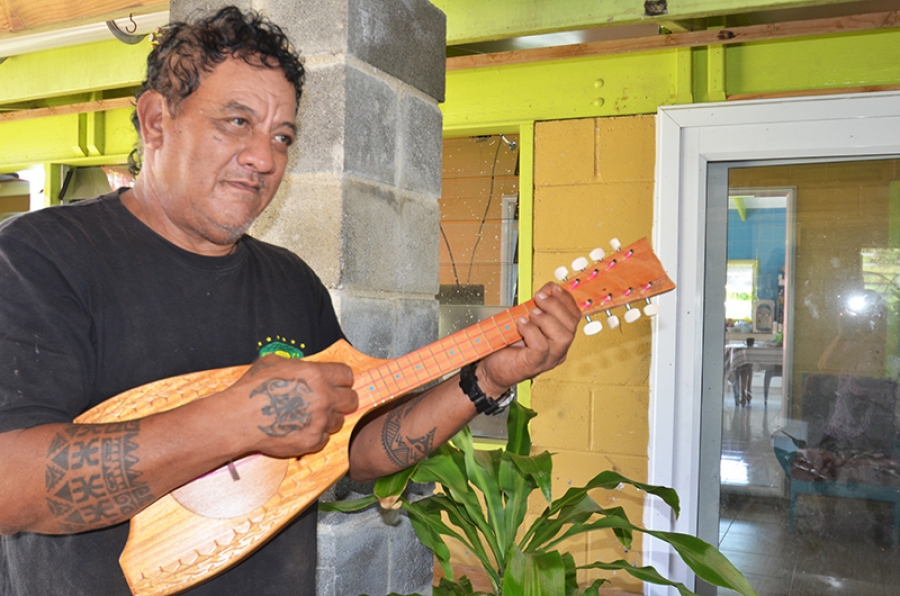 Father and son, Riki and Mahutaariki Adamu begin to craft a selection of local laminated wood into shape for a new ukulele. 18081321

Riki Adamu of M&amp;M Ukulele and Crafts has ukulele (ukarere in CI Maori) in his blood.

They are his passion and have been for most of his life. Growing up on Rakahanga, he taught himself to play when he was 12 years old, and then went on to craft his own traditional coconut style ukulele just from materials he had on the island.

“I saw my uncle making one, but I really had no idea how to do it myself. I just went home and started making one. I wish I still had it.”

He didn’t have any tools to speak of: “Just a machete, that’s all, it was rough. I sanded the coconut shell on the concrete and used the birch wood sap for glue. I cut my strings from fishing line and there were no frets, so I cut a nail in half with a hacksaw blade. It played well.”

At 14 Riki moved with his family to New Zealand, where he later took up the craft professionally, selling to music outlets in Auckland and Wellington.

Just over 10 years ago his band “Hey Fella” arrived from Tahiti on tour, playing a Cook Island music mix.

“When we arrived back in New Zealand after the tour I said to myself, ‘there must be an opportunity over there to make a living’. I brought some ukuleles here to the island and sold them all in two days. Word just got out. So after that I was coming over to Rarotonga about every two to three weeks with some to sell. Then we moved here and I got my hut at the market.”

Adamu uses a mix of local wood including mahogany, rosewood, rain wood, tou, wild hibiscus and cedar and turns out about 30 to 40 individually crafted pieces a week. The finishing design of each one is unique.

He is at home on Rarotonga with his wife, two daughters and two sons. The oldest, Mahutaariki, is slowly taking over the reins of the business. Picking up the challenge, he started helping his father from the age of seven and made his first ukulele when he was 14. While he had the equipment that his father didn’t have, Adamu says he still did very well. “He is very very good at what he does.”

He took his first trip back to Rakahanga in 45 years at Christmas. He still has family there but Adamu says, “it’s changed, it seems much smaller. But the house is still there.”

As well as supplying the local market, Riki and Mahutaariki send their ukulele’s to New Zealand to be sold. Their designs change regularly and have included traditional motifs such as the eagle, shark, dolphin and turtle.

Adamu says there are also a couple of other ukulele craftspeople on the island. “There is a big demand for them”.