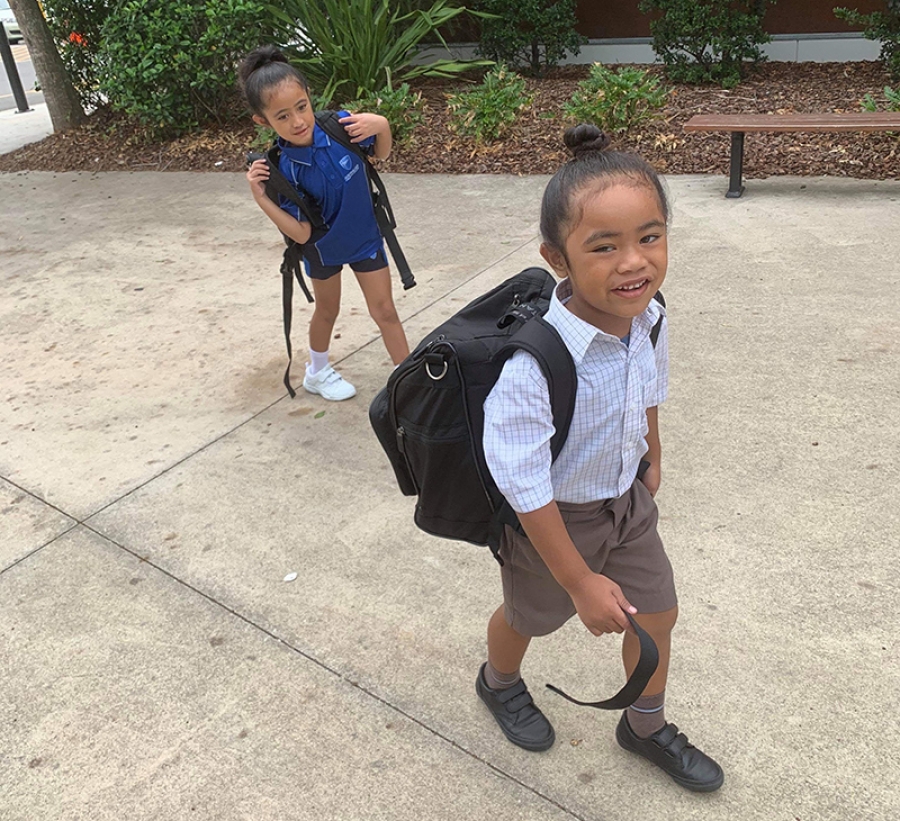 Cyrus Taniela on his way to school for the first time this year, with his big sister Jaylia-Anna. 20020213

The Cook Islands Council of Queensland has taken up the legal cudgels for a young Cook Island boy’s cultural rights to keep his hair long until his haircutting ceremony.

Cyrus Taniela’s Australian private school has told his parents the 5-year-old must have his long hair cut, or lose his enrolment. The school has extended its deadline to the end of this week, under threat of a legal challenge.

Cutting a boy’s hair for the first time is part of the Cook Islands culture, a male’s rite of passage ceremony, and the Taniela family wanted to wait until he is seven to give him his first haircut.

Cyrus’s father Jason Taniela is from Mangaia, and his mum Wendy’s family is from Samoa and Aitutaki.

Australian Christian College, at Moreton near Brisbane, says its uniform policy for boys is: hair must be above the collar and ponytails and buns are not permitted.

Cook Islands Council president Archie Atiau said the council had been talking with the Tanielas.

The deadline for Cyrus’ hair to be cut was Friday last week, but, at the Council’s request, the school gave the family another week, allowing them to seek legal advice.

Wendy received a text message at the weekend on behalf of the principal, stating that they had another week to cut Cyrus’s hair or lose the enrolment.

Atiau castigated the poor response – not even formal notification in writing.

“At this stage the school are standing by their decision. We are guided by the Human Rights Commission who have confirmed that we have a valid case under the Discrimination Act.”

Atiau said the school had not taken into consideration the psychological impact the child and the family could have in the future – when they have not been given the opportunity to practise their culture.

The Council has a team researching on the case, has lodged a formal complaint with the Human Rights Commission, and is working closely with a law firm.

Atiau said the family has acknowledged the media and the Cook Islands family for their continuous support and to keep them in their prayers.