Language starts with parents and tamariki 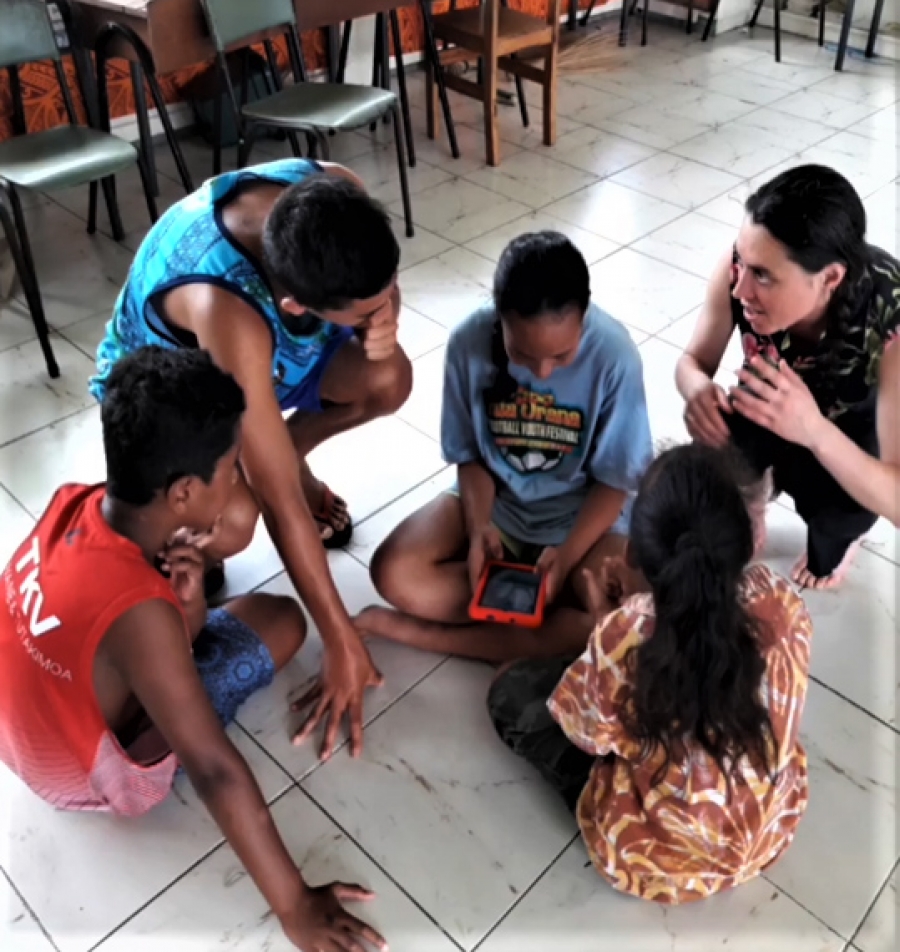 In order for a people to grow and thrive, it is important to know their native tongue. The good news is, there are signs of language revitalisation in the family home.

Nothing is more comfortable for Dr Sally Akevai Nicholas than sitting in a room full of people who are speaking their indigenous language.

Her parents, who were both teachers, instilled the importance of knowing her Cook Islands heritage when they decided to relocate to Rarotonga from New Zealand when she was a child.

That’s a decision Nicholas says she is grateful her parents made.

Had they not, Nicholas could be on a completely different path to the one she’s on now.

Language and identity go hand in hand, one cannot survive without the other, she says.

This is the driving philosophy behind Nicholas wants to use her knowledge and her PhD in vernacular linguistics from Massey University, for the revitalisation of Cook Islands Maori.

Nicholas shakes her head and frowns when asked about statistics around fluent Cook Islands Maori speakers, in particular those that reside overseas.

Her disappointment comes from the fact that it’s children who are not engaging in the language.

“It is not being spoken in the home by their parents, a lot of the time because the parents have limited language knowledge as well,” she says.

Out of the 65,000 people of Cook Islands descent who live in New Zealand less than four per cent can speak Cook Islands Maori.

In the 2018 New Zealand Census, 7833 were recorded as being able to speak the language.

The biggest problem, she reiterates, is the language is not being spoken at home to the younger generations.

“There is almost no inter-generational transmission,” Nicholas says.

Cook Islanders left home with Maori usually being their first language, especially those who were part of the migration to New Zealand for work in the 1950s and 60s.

But going to a country where New Zealand Māori people were suppressed from speaking Māori and practicing their cultural traditions, in a lot of ways Cook Islanders were faced with the same discrimination.

Teau Seabourne, a teacher who spent 50 years in New Zealand speaks of the heartbreak she felt when her desire to reengage in speaking her language became too strong for her to ignore.

“I did New Zealand Māori first because it was the only option,” she says. “And although there are many similarities, there are also a lot of differences too.”

Maori falls into the language bracket of Eastern Polynesia: Tahiti, Hawaii, Cook Islands and New Zealand, with different dialects and consonants, but the same vowels.

Seabourne shares funny anecdotes about when she returned to Rarotonga to retire.

She stood up to say a speech at a family function and was floored when her sister burst into laughter.

“I used a word that changed the entire context of my sentence,” she laughs. “Apparently I said I was going to the beach naked!”

Nicholas’ grandfather, her mother’s father, hails from Ma‘uke. He was sent to New Zealand when he was very young and so her mum and siblings were born and raised in New Zealand.

When Nicholas was six years old, her parents – both teachers – decided it was important to reconnect with that Cook Islands heritage so they packed up and moved from Taranaki to Rarotonga.

It was here in Cook Islands that Nicholas’ love of her indigenous language began to flourish.

Through knowledge of the language, it built determination – a drive to become an expert in Maori.

Back in New Zealand, at the end of the 1970s and early 80s there was a cultural revolution, where Māori people were starting to push for their language, their land and their culture.

On their return to New Zealand, Nicholas’ family became heavily involved in the Köhanga Reo movement, where tamariki attend daycare in total immersion Māori – they speak in Maori, they sing in Maori, everything is based around the revitalisation of the language model.

As a young adult, Nicholas spoke both fluent Cook Islands Maori and New Zealand Māori. Before she even left school for university, she knew this was the area she wanted to specialise.

And Nicholas is an expert in linguistics, she is often asked to guest lecture at the University of the South Pacific’s Cook Islands campus.

“It’s a privilege to have someone like Ake come here and teach,” campus director Debi Futter-Puati says.

But being a perfectionist and highly intelligent comes with its flaws – there is still one area that Nicholas doesn’t feel like she’s hitting the mark.

Through research she has find that children will not engage if it’s not through channels they’re interested in or familiar with.

So she intends to take the language to them through their devices and has come up with interactive cartoons and animations completely in Maori.

She’s been back to her grandfather’s home island of Ma‘uke and shared these animations with children there.

“This is where the revitalisation is going to take place – through the children, our tamariki,” she says

“Our languages will die if we don’t get them speaking and interacting with our Maori.”

It’s not just our tamariki who will be part of the Maori language revolution – it’s their parents as well.

At a beginner’s Maori class at the University of the South Pacific, which started this week, 30 keen adults sit in a classroom eager to learn the language of the land they have either returned to, or have made their homes.

It is the familiarity of the faces in the beginners' Maori class that is perhaps most marked.

Looking around the light, bright lecture room at the University of the South Pacific's campus in Avarua, there are people well-known, well-established in the Rarotonga community – yet, like so many others, they still speak no Maori.

There are Cook Islands Maori who have spent most of their lives in New Zealand or Australia, there are New Zealand Māori, there are papa'a, there are faces from elsewhere in the Pacific and further afield in Asia.

James Puati, who's married to Debi Futter-Puati, is grave and serious.

For this New Zealand-born Cook Islands Maori, his own native reo was a third language: he grew up speaking English and New Zealand Māori. To him, this is a critical endeavour in the restoration of a culture.

His words are carefully and clearly enunciated for his learners.

Fellow tutor, Teau Seabourne bounces around the room like a ray of Atiu sunlight, laughing, speaking fast and fluently. She wants the learners to feel it, absorb it, live the language.

The two teachers complement each other, as the learners furrow their brows.

Cook Islands News editor Jonathan Milne is one of those who is taking on the challenge of learning Cook Islands Maori.

“As we learn our greetings, many of the New Zealanders tangle up their ‘kotou’ and tatou’, more familiar to those who grew up around New Zealand Maori,” he says.

The tutors work around the room; one woman says she's not yet ready to try introducing herself. Yet by the time they get to the next exercise, introducing a classmate, she's first to raise her hand.

In one small group, the papa'a repeatedly turn to the one Cook Islands Maori in the group for assistance.

She laughs. "You're discriminating because I'm brown! I don't know any more than you."

Next week, the students are told, they’ll be moving to a bigger room, such is the demand for the course. There are too many people keen to take this long-awaited chance to become fuller, more engaged members of this community.

This is marvellous, says Debi Futter-Puati.