It’s all a matter of balance, says Cook Islands legend 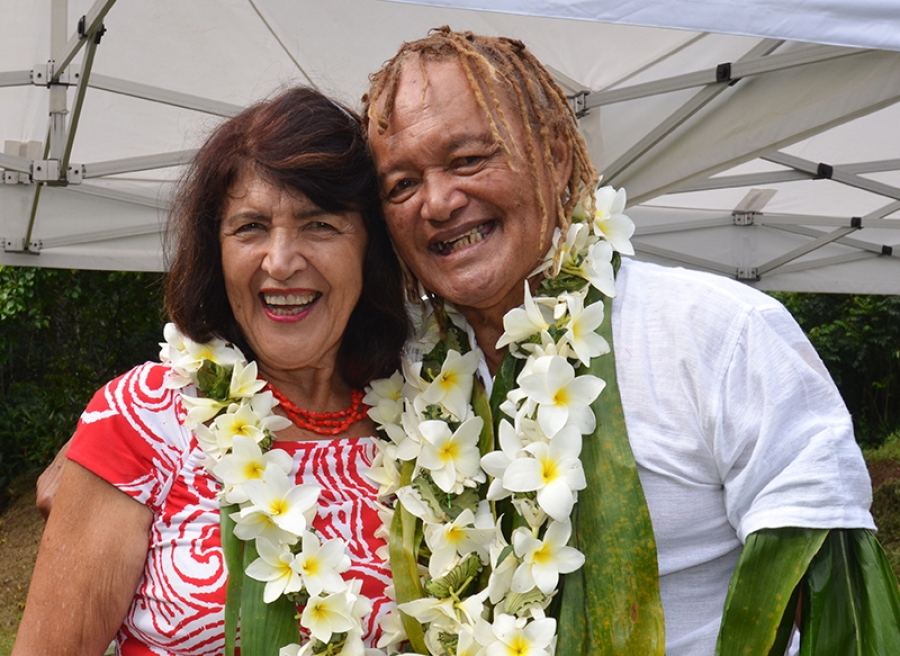 Pa with his wife and business partner Jillian Sobieska, who fi rst convinced him to go professional with trekking.

“Balance is most important. You’ve got to have balance.”

Cook Islands legend Pa Teuruaa is explaining what it takes to walk the cross-island trek, but to me, it seems he could just as easily be revealing the secret to his long, happy and uniquely full life.

Having recently marked his 5000th hike across Rarotonga, leading roughly 75,000 people across the island over the past 33 years, the 70-something year old has made the decision to hand over responsibility for the cross-island trek to his nephew, Bruce Goldsworthy.

While Pa will still lead his regular nature walks, he says he will “never” walk the cross-island trek again.

Pa first ventured across the island at the age of five. “I climbed every mountaintop,” he says. “And I enjoyed it, so I kept on doing it.”

I ask Pa if that’s what he did for fun then, climbing the mountains of Rarotonga as a young boy.

“Not for fun,” he gently contradicts me. “It was joy. Spiritual joy.”

“I had no friends to play with, but I found a connection. I’d get stronger, a clear mind, and I found all the beauty of the island.

“The dancing of the palm trees would remind me of the hula girls, all captured in a beautiful, divine, spiritual way. And the birds – when I walk, when I climb up the hill, they all follow from branch to branch. When I sit, they all look and then they all come to me. I give them a piece of coconut.

“So many birds. Hundreds of them – hundreds.”

There’s something almost lyrical, or poetic about the way Pa talks.

It’s strangely compelling, so much so that throughout the entire hour we spend together I completely fail to jot down a single note about how Pa looks, the clothes he’s wearing, how he sits or expresses himself.

These are the sort of things a good journalist is taught to observe when interviewing someone for an article like this, to provide the story with what they call “colour” in reporter-speak. But perhaps Pa’s words are colourful enough.

His life has been colourful too. Even before he started leading the cross-island treks that made him famous, Pa was a swimming champion, a surf lifesaver, a bodybuilder, an Ironman competitor. “Best I ever did was coming third,” he admits.

Travelling to New Zealand at the age of 15, Pa first worked in a factory as a car painter before the world of competitive swimming beckoned.

But while he won “lots of competitions”, like everything Pa does, he swam purely for the love of it.

Living in Auckland in the early sixties, Pa would swim across the city harbour from Devonport to Parnell just to get to work at the swimming pools there.

His wife Jillian remembers seeing him in the paper – the New Zealand Herald interviewed him after three days of observing his regular harbour crossing.

In addition to his swimming, Pa’s bodybuilding also helped him get jobs working security around Auckland. “My build was massive then,” says Pa.

One night in June, 1964, Pa got to meet the members of a little group called The Beatles, escorting them into the Auckland Town Hall ahead of their performance. “Lovely men,” he says.

Later, Pa would travel the world with a girlfriend, an American named Sally who happened to be the granddaughter of a rich oilman – owner of the Phillips 66 oil company.

“When I met her, she asked me where I lived – I told her Cook Islands,” he says. “She said, ‘Oh, next to the clock in England?’

“We enjoyed life, and went all over the world, travelling. But I was homesick. I told her I was going back home. She wanted me to come and get married in America and live there.

“I gave her the card and the money back and I came home.”

There’s a little bit more to this story of Sally and Pa. Six months later, back in Rarotonga, Pa’s life was good, he says, but then came “lonelier times”.

“One day I ask my God, ‘Please Heavenly Father, place a beautiful woman to come into my beautiful life. Amen’.”

It was New Year’s Eve, 1986. That night a cyclone – Hurricane Sally, hit Rarotonga, lifting the roof of Pa’s little hut clean off and dropping it on the back road.

The next morning he heard a voice outside.

“There was no other house around, only my little hut,” he says. “And a woman’s voice called, ‘Anybody home?’

“I looked down – two girls, two ladies. One dark hair, one blonde one. I asked my God, ‘Which one?’ My God said, ‘The dark-haired one. That’s her’. And they’ve been together ever since.

That dark-haired woman sent to him by God is of course Pa’s wife Jillian, who first suggested to Pa that he turn his cross-island walks into a business.

More than three decades later, not only has that business brought great joy to Pa’s life, it has also helped him bring joy to many thousands of other people from all around the globe.

One time in 1996, Pa noticed a gentleman at the end of the walk who seemed hot but oddly passed on the offer of a cooling dip.

“He was wearing long pants and at the end of the walk I said to him, ‘Excuse me, go and have a swim, it’s too hot’,” remembers Pa.

“He looks at me and says ‘Pa, put your hand on my legs here’. I pulled his trouser leg up – it was only a piece of wood.

“I always touch the group with a prayer before we hike. He told me, ‘You’ve blessed me with healing!’ When I asked him what happened to his leg he told me he was a radio contact man in the Vietnam War. They will kill him first, before any other people. That’s how he lost his leg.”

Not long after that story – one of many Pa shared with me during our talk – it is time to go.

We shook hands when I first arrived, but as I walk out to my car, Pa catches me in an embrace.

There is a favourite phrase of his: “Give life to life,” Pa says, something anyone who has spent any time at all with him will have no doubt heard before.

Now, after less than an hour with the man whose colourful life and way of living has touched so many thousands of other lives, I can’t help but feel like he’s given a little bit of that life to me.