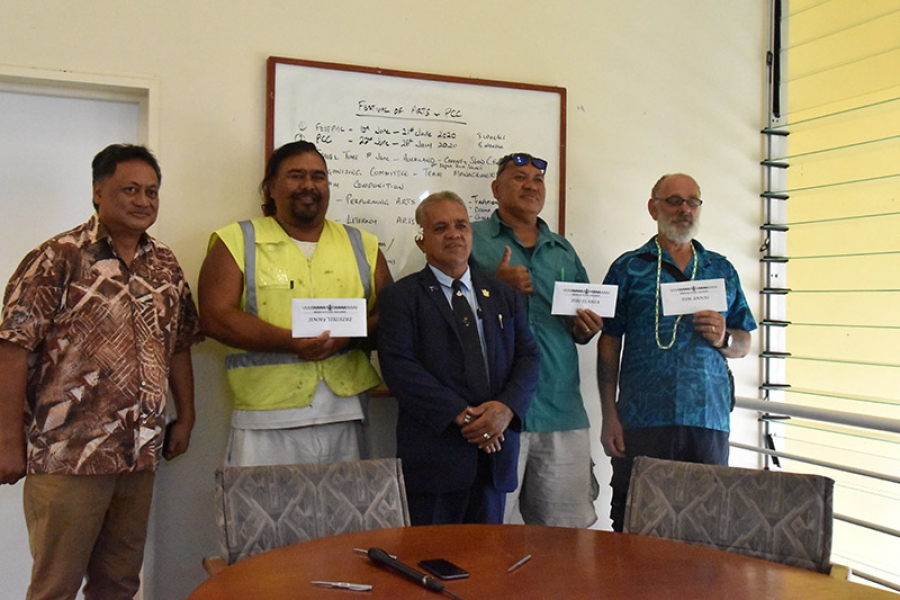 Annas and two other staffers collected their cheques in a special ceremony at the Ministry of Culture, organised by Culture Secretary Anthony Turua and the Minister for Culture, George Maggie. 19121818

Staff of the Ministry of Culture who were owed thousands of dollars in payments since working at the 2015 Te Maeva Nui Festival had their prayers answered yesterday.

Just four workers have been identified and remunerated including former security staff member Tom Annas, who was due $2240 for 280 hours of work over the five-week festival.

Annas said although his final settlement fell short of what was originally owing, he was satisfied with the payment, which gave him mental relief from the financial stress the issue had caused him.

“I feel great. It’s been a long time coming.”

Annas and two other staffers collected their cheques in a special ceremony at the Ministry of Culture, organised by Culture Secretary Anthony Turua and the Minister for Culture, George Maggie.

Maggie told the workers that although the issue had arisen under a different administration, he was happy to finally settle it after so many years.

He told CINews he wanted to clear his name. “I feel happy, but I can’t apologise for the mistake of somebody else.”

“It should be the Minister before me and the Secretary before me (who should) go and apologise to those people.

“But it is a very good, happy day for me trying to find the money and then hand it back to them.”

Turua apologised to the workers for the delay in payment which he said was bound by an audit process.

He told CINews the issue was a “learning lesson” and highlighted the need for all Government departments and Ministries to follow standard practice.

“It’s just understanding the process and learning how to comply with all the elements and all the practice.

“I think that might have been a challenge back in 2015- some of these challenges weren’t addressed” said Turua.

The claims are the first to be settled. The true scale of the issue is still unknown, as many other workers who missed out on their pay did not lay complaints.

The Ministry is urging others to come forward with their claims.