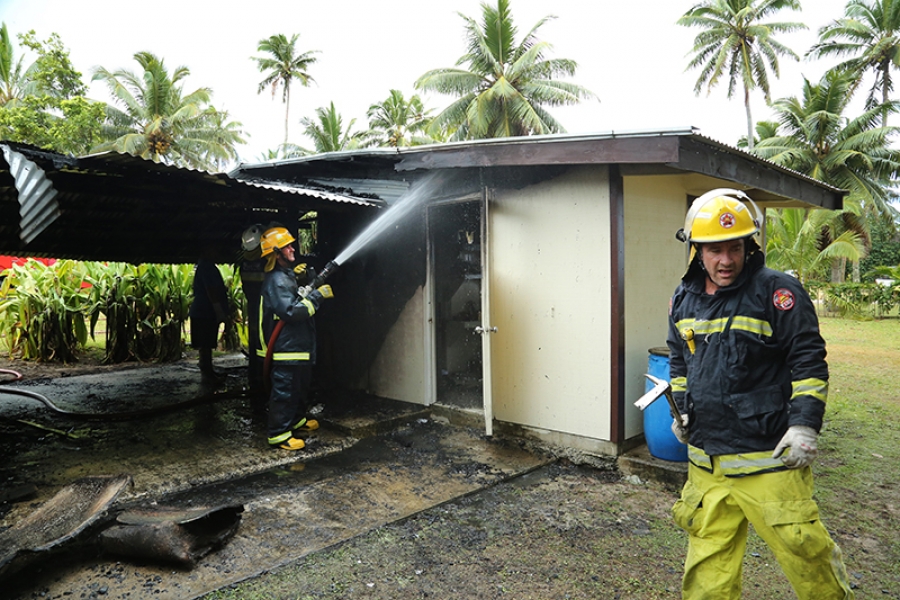 Firemen at the scene of the blaze on the main road in Titikaveka. 18092618

Fire brigades on Rarotonga had a busy afternoon yesterday with callouts to two blazes in the Titikaveka area.

Both were house fires – one on the main road that started around noon - and the second a burning house behind Titikaveka College a couple of hours later.

In the first incident members of the Teimurimotia brigade were first on the scene and got the blaze under control before other units arrived.

Chief Fire Officer Willy Hagai said: “It was awesome work by these guys. There are a few guys who live locally who helped them, but the good thing is the way village volunteer brigades are able to respond is really helpful to the community of Rarotonga.”

Community members were quick to jump online and share their concerns about having a second blaze on the same day.

One Facebook user said they heard explosions before being able to view smoke from their property in Papaaroa.

Another said they spotted five police cars headed through Muri towards the scene of the fire around 3.30pm.

A neighbour later posted the blaze was under-control late afternoon.

Hagai said the causes of both fires were unknown.

At the scene of the first fire he said: “Having a look at this we are not quite sure what the cause of this blaze is yet. It looks like the back of the kitchen and the washhouse area.

“It is fortunate that it is separate from the rest of the house. But we will get a team up here to have a look.”

While pleased with the performance of the brigade crews Hagai was less than happy with drivers on the island.

“We still want to get back to the people who are driving on the roads - please look in your rear-vision mirror.

“Emergency-response vehicles are coming up behind you and you are not veering away and it is causing big vehicles to swerve out of the way, which actually causes an opposite reaction for the traffic coming towards them.

“So if you can please look in your rear vision mirrors if you hear the siren then please make way.

“Our trucks are not small cars – they’re not utes – they are actually wide trucks that need to get to an emergency.

“If you don’t think we should be on the road then consider this - it could be your house we are responding to so think about that.”