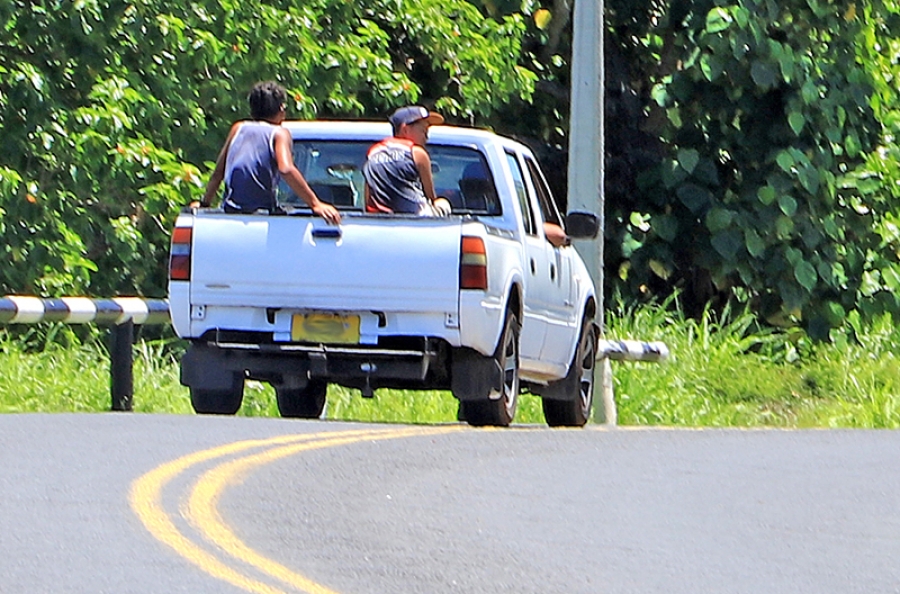 The sight of people riding on the back of trucks is commonplace on Rarotonga. 18120521

Truck drivers who allow anyone to ride in a manner in which they are at risk or in danger will be liable for prosecution.

That’s according to Cook Islands Police Service spokesman Trevor Pitt, who says no-one should put themselves at risk by riding on a truck in a careless way. However, he says drivers are ultimately responsible for the safety of their passengers.

“If anyone is injured as a result, the driver will be prosecuted with the more serious offence of having caused injury.”

He says the offence is covered under a dangerous driving clause in the law covering traffic offences.

Riding on the back of trucks and utes is a deeply entrenched part of the Cook Islands lifestyle, and publicity surrounding the likelihood of drivers being fined for dangerous driving caused controversy in January this year.

Following an incident in which a child was injured after falling from the back of a truck before Christmas, comments on social media highlighted widespread confusion among island residents regarding the law.

Pitt said he understood passengers were not allowed to sit on the edges of the tray side walls, but must be seated on the floor.

“Accidents do happen and we see people breaking those laws all the time.”

Shortly after these comments were published in CINews, Police Inspector John Strickland said truck drivers who thought their passengers were unsafe should either not start their vehicle, or if they were already in motion, should pull over to the side of the road.

“Our laws around this remain the same and haven’t changed for a very long time.

“It’s anything unsafe, like sitting on the edge of the truck tray, or standing without holding on, that is not allowed.

“People can stand in (behind the cab) as long as they are holding onto a secure frame and if they are seated in a chair, it should be low.”

The law is widely ignored by police, truck drivers and their passengers. Last week, for instance, CINews spotted a number of children sitting precariously on the tray walls of fast-moving trucks, and saw one truck carrying nine children – some of whom were standing up. The truck drove directly past a police vehicle, but was not stopped.