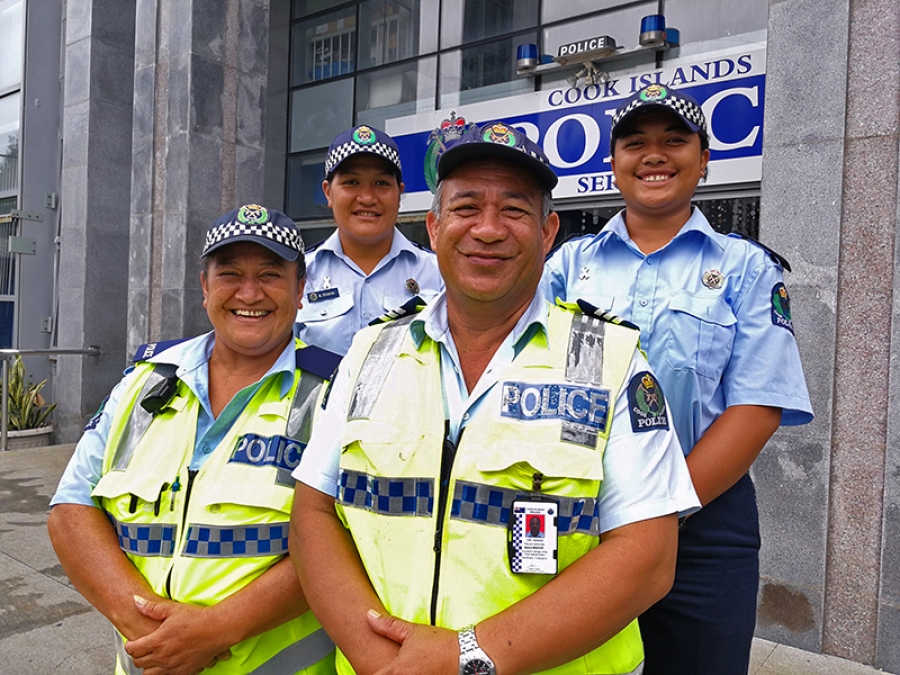 Apera Bishop (front) pictured with some of his colleagues, has retired from the police service after 30 years. 18121355

The depth of the Police Service is a little shallower this week as we bid a fond farewell to Apera Bishop, who is turning in his sergeant’s stripes after three decades in uniform.

“I’ll miss my uniform,” says Bishop with his characteristic grin, as an emotional close on a long career begins to sink in with a new reality around the corner.

The 30-year veteran is following his heart to Australia where family beckons and a new chapter begins for one of the most level-headed cops you’ll meet on the frontline.

Sergeant Bishop was a 1988 recruit under the late Pupuke Robati’s patronage and one of only two that continued in the job this far from the original 24 officers.

Maritime Commander Inspector Tepaki Baxter will now be the only recruit from that ’88 intake, which Bishop wanted to secure so that he could join the police patrol boat Te Kukupa.

But at the time, he managed to enter the police on the second intake so missed that opportunity to go to sea.

The desire to go to sea with the boat stayed with him as he worked his way through with frontline officers and a seven-year stint on duty at the international airport. In those days, the policing structure provided for a team of four officers to cover the airport, undertaking a range of duties beyond what is now in place under modern border control.

National economic hardship during the mid-1990s prompted Bishop to look into helping support his family by doing a cooking course and taking on work as a chef with the then popular Portofino restaurant. And you just never know when your talents and skills are going to come in handy, which is what helped launch Bishop’s 16-year tenure with Te Kukupa.

After completing seamanship training in Auckland with the New Zealand Navy, Bishop transferred from a minesweeper vessel to the patrol boat, following a half-life refit of Te Kukupa. He joined the voyage back to home port and his career as a cook at sea began to sustain the crew over many years.

Bishop did step out of the galley though completing courses in Australia at the Maritime College in Tasmania in electrical engineering and officers training. He eventually served as the Navigation Officer until he’d “had enough” in 2013.

Those 16 years with the boat were a career highlight and the camaraderie with fellow crew members have created indelible experiences and memories.

“Even after a hurricane at sea, you come back but then you need to go out again.”

The experience was “really good” and Bishop is thankful for having had the support from his wife Teremoana and family, which was “very important” to him over the years in the police.

“For me, life in the police has been good.”

After a lengthy career, the change will be dramatic. But Bishop is unflappable. He has an underlying calmness, which shuts out negativity and the extremity of stress from frontline duties.

“I just ignore the negative. After each shift, I go home and then I can’t wait to get back.”

That separation of the good and bad kept a balance that came with support at home and the strong emotional pull of the children, and grandchildren.

“When you look at the grandkids, your heart goes soft.”

Which is why Bishop is leaving the ever-changing policing environment. The demands for more manpower, resources, and technical requirements of modern police work are being traded in for family priorities.

The sergeant will now need to make some adjustments. But so too will the Frontline Division for having lost a valued member of Unit 2.