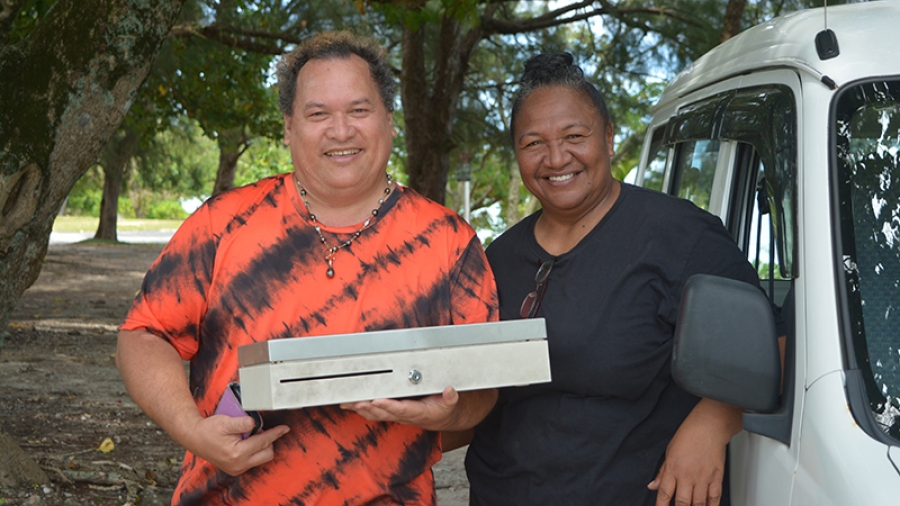 Tex Mart owner Tex Tangimetua and Doreen Boggs with the cash till they found at the Social Centre sea wall in Nikao last year. 19111107

Repeat offender, who tossed a store till at the Social Centre gets hefty jail sentence.

Eighteen-year-old Tereapii Mose, who acted as the getaway driver and lookout in the Tex Mart aggravated robbery case and committed other crimes, has been sentenced to two years in prison.

On November 10, 2019, Mose and his co-offender were consuming liquor and formulated a plan to steal cash from the Tex Mart Store in Betela.

Judge Judith Potter said Mose and his associate were disguised in clothing and there were no customers in the store. Mose waited outside on the motorcycle and acted as the look out, Potter said.

His co-offender entered the store, rushed towards the shop assistant, who was 18 at the time and started punching him in the face numerous times.

The co-offender ripped the till and ran out of the store, they returned to Mose’s residence, and shared approximately $1000 that was in the till.

The till was found at the Social Centre sea wall in Nikao the day after the robbery and only $100 of stolen money was recovered.

Epati submitted for Mose to serve a short term of between three to six months in prison followed by probation due to his youth and defence lawyer Mark Short agreed.

Short said his client’s family were prepared to accept whatever sentencing the court handed.

He said Mose was a “naive young man”, who dropped out of school early, hung out with the wrong friends and committed offences.

Mose also faced nine other chargers including four counts of contempt of court.

On July 13, last year, Mose and a co-offender burgled the Tex Mart store, where he and another associate took $200 from the till, $1720 from the safe and cigarettes and alcohol valued at approximately $2400.

On October 18, he burgled a private residence and helped himself to watches, Samsung phones and two bottles of vodka – some items were found and returned to the owner.

On December 21 last year, Mose and another co-offender entered a property in Arorangi but were discovered and chased out of the house. It was later found that a box of Woodstock was taken and a motorcycle part was removed.

In another theft charge, Mose and another co-offender took a bag that contained cash and phones valued at $3798 from Rutaki beach, while the owners were swimming. The incident took place on August 18, 2019.

Judge Potter said Mose was a first-time offender, but the victim impact report from the private residents showed they were shocked and frightened by the intrusion of their privacy when they were asleep.