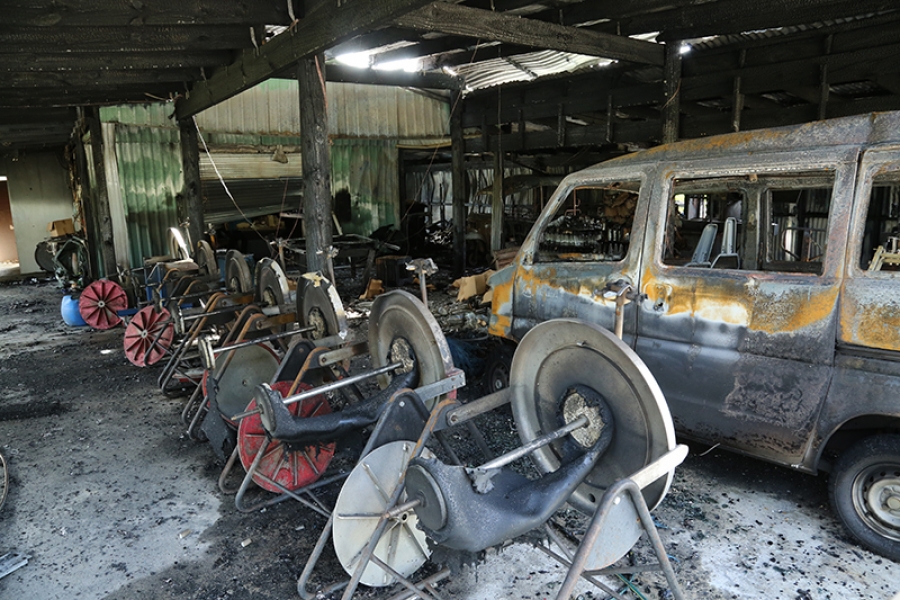 The destroyed interior of the Noni plant at Titikaveka shows just how ferocious the fire was on Saturday. 18100106a

The blaze broke out at about 3.30pm on Saturday and quickly took hold of the building.

Four fire units attended the scene, but were unable to slow the inferno.

Stafford told the CI News: “The fire spread so quickly … 10 to 15 minutes” to destroy the whole factory and its contents.

Stafford said a $100,000 stainless steel bottling plant was up in smoke in 10 minutes.

“There’s nothing salvageable. The building is a write off. It’s a blessing we were insured,” he said.

“Insurance assessors will be arriving in the next couple of days.”

The company’s Noni exports are worth about $1.5 million and it produces the Vaima water brand.

It works closely with the Ministry of Agriculture to support the sustainable agricultural methods employed by Cook Islands noni farmers.

On its website the company says: “Our staff assists where we can in sharing agricultural protocols to insure clean, safe fruit for all our processing operations.

“We feel our company’s efforts in support of sustainable agriculture, soil building, and non-use of chemical substance on the noni trees are the future of agriculture on our islands.

“Our Noni Juice is fermented and pressed in small batches with careful consideration to Cook Islands traditions and protocols.”

Stafford said his 13 full-time workers won’t be out of jobs because “there is other work for them to do, so that’s okay.

“They’ll be fine, because we have other projects to go on to.”

And he was full of praise for the firefighters – “They did a wonderful job“ - and also for the community. “Everyone has been just magical. There has been a lot of support from the community and friends.”

Stafford said: “I’m not angry. It is what it is. We have to move forward.

“It just slows us up for four to six weeks. No orchards were damaged, nor the containers, just the pressing operation.”

He said he was already looking into replacing the presses and he thought they would be on Rarotonga within the next three to five weeks.

“We will get up and running, it will be okay.”

The blaze was the fifth on Rarotonga since September 21.

Two of those were in Arorangi, and three in Titikaveka.