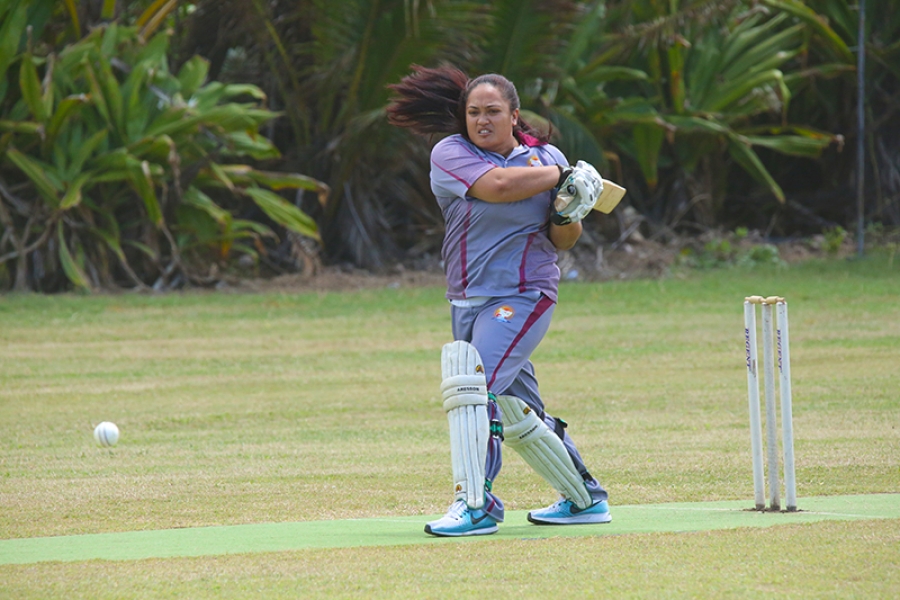 Benedicta Matapo crashes the ball away against Turangi. 18101411

Tupapa went down to Nikao Wolves in an interesting men’s tussle at Victoria Park, while Turangi lost to Matavera at home.

In the feature men’s clash, the Wolves won the toss and decided to bat first with Teokoitu Pana coming out strong from a duck in the previous round to top score with 55 runs not out. He was well supported by Deacon Teapa (32) and Maru Mataora (30) for a score of 196 runs for six in 20 overs.

In reply, Tupapa didn't start well with their run chase with two of their top order bowled out for ducks in the first over.

Turori Matutu and Kunta Ritawa’s top score of 28 runs each was not enough as the Wolves pulled off a big win to put themselves on the top of the points table with Matavera.

In the women’s clash, the high-flying Turangi were brought to the ground by Matavera in the major upset of the round.

Matavera batted first, and scored a total of 175 runs with Phillica Maruariki top scoring on 59 runs and she was well supported by Tina Mato 42 (not out).

Turangi’s bowling was not in good form last weekend, conceding 42 extras through wides. Matavera managed 175 runs for four from their 20 overs.

In reply, Turangi tried their best to chase the total, only managing to score 120 runs from their 20 overs with Mona More top scoring on 52 runs, handing Matavera their second win in the competition.

In the other highlight of the round, Mike Hoff of Tavana scored a massive 144 runs not out in the nine wicket win against Tupapa II.

Tupapa-Nikao – Tupapa batted first and were all out for 83 in 15 overs. Roruama Ruarau top scored with 36 runs. Three of the Nikao bowlers shared three wickets each. In reply, Nikao overcame the total runs in the 12th over winning by five wickets. Rachel Auora top scored with 31 runs.

Takuvaine-Avana – Takuvaine batted first and scored 112 runs with Monga George top scoring 34 runs not out. Pick of the bowlers for Avana was the young Annie Taufahema taking four wickets from four overs. In reply, another excellent performance from the talented young

Avana who took the chase right down to the wire. Unfortunately they were all bowled out for 111 runs – two runs short of win. Avana skipper Margaret led the way with the bat top scoring on 38 runs and well supported by Paeru Ioane on 25.

In reply, a steady partnership from the ever reliable Tereinga Maoate (36) and Vane Tangimetua Sr (80) not out provided the backbone of their successful run chase. The game really went to the wire and Turangi took the win with one ball to spare.

Tavana-Tupapa – Tupapa II batted first and scored a massive 194 runs for five in their 20 overs. Poti Maeva top scored on 74 runs. It was one of the best batting performance from Tupapa II however an even better batting performance from Avana’s Mike Hoff, who offset a great effort from Tupapa II. Hoff scored one of the highest individual score by a player with 144 runs not out. Tavana won the match by nine wickets with an over to spare.

Takuvaine-Matavera – Matavera batted first and scored 180 runs for eight in their 20 overs. In reply, Takuvaine didn't start well with the run chase with their top two batsmen scoring less than 10 runs. Bruce John scored 48 runs to give some stability, but they were all out for 136 runs. The unbeaten Matavera won the match by a good 45 runs.