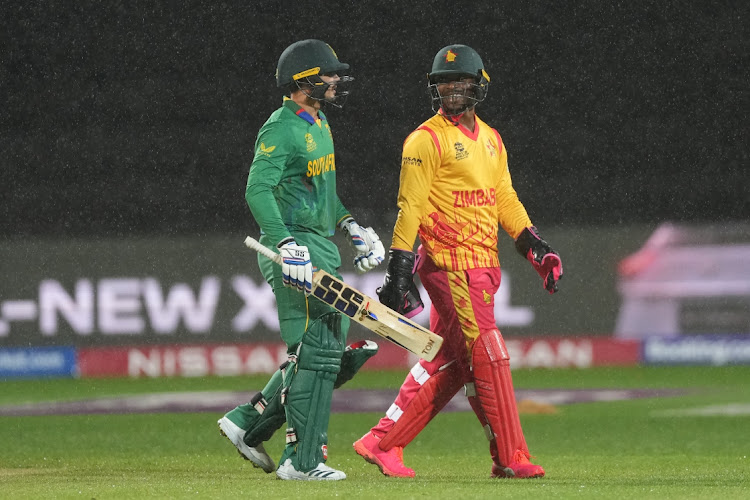 Rain affected both games played in Hobart on Monday. Bangladesh managed to keep the Netherlands at bay whereas South Africa were unlucky to share the points with Zimbabwe. Analyst Rahul Patil looks back at all the action from Australia.

Bangladesh’s overall record in T20 world cups is not one to be proud of. With only seven wins in 33 games and even more poor form in the lead up to this year's tournament meant that expectations from them this time around are pretty low. Netherlands on the other hand played some good cricket in the qualifying round to make it through to the Super 12 stage.

The game itself was quite poor from a cricketing perspective. Poor bowling, poor shots, poor fielding and extremely poor running between the wickets from both teams. Asked to bat first Bangladesh made 144 which was just below par in Hobart. Watching their innings though one felt that they could have got a few more but threw away the advantage at crucial times through some brainless shot selection.

The Netherlands would have happily accepted a target of 145 at the start of the game. But their run chase got off to a disastrous start with wickets of the first two deliveries by Taskin Ahmed. What followed next was a complete brain fade by the Dutch as they lost two more wickets to unnecessary run outs.

At 15 for 4 the writing was on the wall but Colin Ackerman played a lone hand of 62 to keep his side in the hunt. The Netherlands kept losing wickets at regular intervals and despite a few lusty blows at the end it just wasn't enough. Bangladesh will be happy picking up the points and the Netherlands will be disappointed at their overall effort in the field and with the bat.

Rain and South Africa have a long standing one sided relationship. One sided because the rain loves them but South Africa does not reciprocate the same feelings. Thirty years back rain knocked them out of the ODI World Cup against England. Then in the 2003 ODI World Cup it was rain once again that was the cause of their misery against Sri Lanka. South Africa were hosting that tournament and them not making it to the semis was a huge upset.

Chasing a target of 64 in 7 overs due to various interruptions in play because of rain South Africa were motoring along at 51 for no loss from just 3 overs. Quinton de Kock (47* in 18 balls) was in sublime touch smashing the ball to all parts of the ground but the rain returned one last time and the game was finally called off. Both teams picked up a point each. Zimbabwe were delighted to get something out of a game in which they had no hope of victory whereas South Africa were left rueing their luck once again.