Journey through a mighty storm 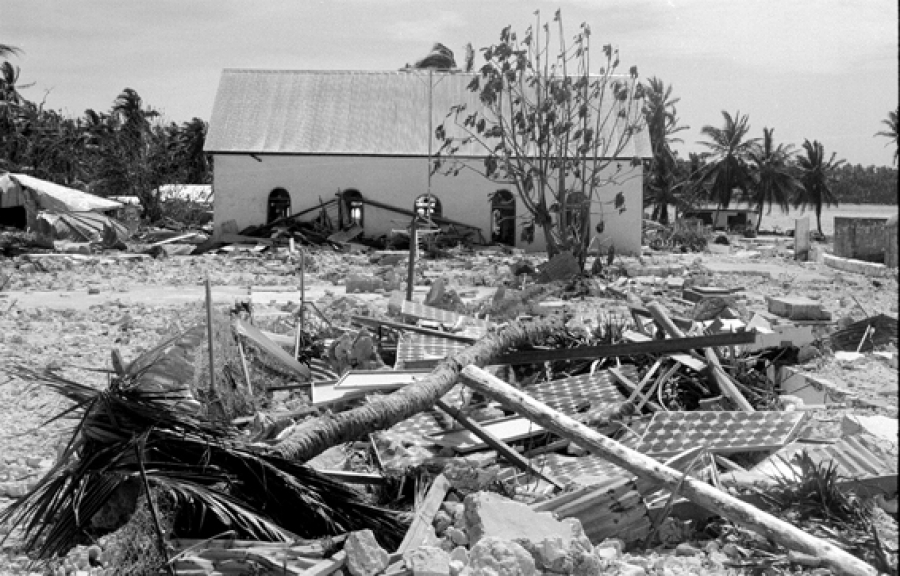 FOR THE past 18 years, it is ritual that my family and I attend a memorial service held every year, on the November 1, to commemorate the lives that were taken in the devastating Cyclone Martin, which struck our beautiful home, Manihiki.

There is a book called Matini that holds the many stories from victims of the cyclone. Unfortunately we weren’t approached to share our experience. I reflect on this day always, as it was one of the major turning points in my life. God’s mysterious plans for my life began like this:

I am Taiti Toroma. I grew up in an Adventist family in Manihiki, but I lost interest in religion when I was a teenager. We moved to New Zealand to find work. But, sadly, I ended up with doing some worldly things that I’m not supposed to do. Several years later we returned home to the tiny island of Manihiki. Shortly after I married Rufina (Vina) the economy went bad and I lost my job.

The Adventist pastor stopped to visit, but I was not home. Rufina, a loving Christian woman, welcomed him. The pastor invited the family to attend church and the children were eager to go. Rufina and I soon joined them. It was not long before I felt the call of God in my life. With Rufina’s encouragement I returned to the faith of my childhood and we were baptised together.

I was home at last!

I began working with the pastor to win others to Christ. Then the pastor was called back to the main island and the church asked me to serve as Head Elder (lay pastor). I had doubts, for I was still a new Adventist. But with the people’s encouragement, I accepted the challenge.

When the new pastor arrived, he encouraged me to keep up this ministry. One day he asked me if I had considered becoming a pastor. After that I spent my early morning hours on the beach praying to know God’s will.

I applied to Fulton College and was accepted. But I had no scholarship and no sponsor. The mission would pay a portion of my tuition, but I would have to provide the rest, plus pay to move my family of six to Fiji. That is when we decided to sell everything we owned except what we needed to take with us. We figured that this would be just enough money to get us to Fiji and start school.

But then came the unexpected change of plans.

“I tore open the envelope from Fulton College and quickly scanned its contents. Yes! I had been accepted to study theology, and classes would begin in two months. I ran to tell my wife and children the good news.

We had already decided to sell everything we could to pay for our trip to Fiji and my tuition. We had only two months to sell our furniture and household goods and be ready to leave. But before we could begin to pack, something happened that changed everything.

The telephone rang, and a voice announced that a cyclone was heading towards our island. We knew what to do and wasted no time getting started. After we tied down our belongings and reinforced our houses, we were to go to the highest ground on the island to wait out the storm. Now, you have to understand that our tiny island is really an atoll, and the highest ground is only a few feet above sea level!

We were moving the last of our furniture off the floor when the first strong winds began to blow. Then came the rains. Soon high waves were pounding the shore. We decided we’d better stay in the house. Suddenly, it sounded as if an aeroplane was landing right over our heads! I told my children to stay back while I checked outside. I opened the door and saw sheets of metal roofing being tossed along the ground by the wind. Wind-blown waves were pushing dangerously close to our home.

Let’s get out of here – fast! I shouted. We grabbed the kids by the hand and ran toward the safety of higher ground. The wind roared around us, and the waves crashed against buildings. Debris flew through the air, but we had to keep going. Waves had already covered the narrow spit of land linking the two sides of the island, but we had to cross. So we waded into the water. The chest-high water nearly tore the children away from us, but we held them tightly and made it across.

The wind bent the palm trees until they almost touched the ground and the coconuts flew in the air like cannonballs. All the way we prayed for Gods protection. The 30-minute trip seemed to take forever, but at last we arrived at the pastor’s house. The waves had not reached it yet; here we would be safer. The pastor was away, but we got in and slumped to the floor exhausted.

Others came and we helped them get inside. Rufina found dry clothes for them. The storm continued to rage throughout the afternoon and into the night, but no one slept. There was no room to lie down. Sometime during the night it grew quiet.

The morning dawned gray and gloomy. We were anxious to return to our home, but the police would not allow us to enter the area until the next day. We wondered what we would find when we reached there.

We carefully picked our way across the sandy beach that now was covered with shards of broken glass. We hardly recognised our neighborhood. Only a few cement blocks marked what a cluster of houses was once. Trees had crushed other houses. Then we saw our house. It had blown off its foundation and lay smashed against a large breadfruit tree. We picked through the wreckage and found a few pieces of clothes we could identify and a few personal effects. Everything else was gone or damaged beyond repair. Nothing remained of the things that we had planned to sell to pay our way to Fulton and nothing remained of what we had planned to take with us.

My wife wept silently as she picked through the rubble. The children could not understand our loss. All I could say was: ‘’What has happened has happened. We cannot bring it back.’’

With nothing left to clean up or dry out, we turned our energies to clearing up the island’s small airstrip so rescue planes could land. As neighbours took a roll call, we discovered that 31 people were missing and presumed drowned. Later four of them were found on an island 25 miles away.

We flew to the main island and were given food, clothes and shelter to meet our immediate needs. I went to the Cook Islands SDA mission to ask what to do. Because we had nothing to sell to raise money for our trip, the mission suggested that I wait a year before going. I could work and save money for my tuition. But I knew that if I didn’t go now, I would never be able to go. They asked me to let them know in a few days what we decided.

The family prayed, then my wife called family members around and in New Zealand. Each one helped as they could. Within a few days we had the money we needed to go!

We arrived at Fulton College with nothing but a few clothes and grateful hearts.

We have learned again the value of spending time on our knees.

We know God got us here and we must trust Him to keep us here. He led us through the storm and through the flood; He will lead us through each day’s trials if we trust Him. May this challenging story help you in your journey of life knowing that to trust Jesus no matter what. God bless and kia manuia.